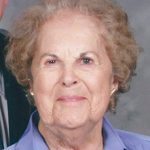 Dorothy was born Dec. 28, 1917, in Austin, the daughter of Fred and Ethel (Pike) Volkmann. She graduated from Austin High School in 1935. She went to work for the Geo. A. Hormel Company, where she was Jay C. Hormel’s secretary until he passed away in 1954. She then became Tim Corey’s secretary, a position she held until his retirement in 1965, at which time, she too retired. Dorothy married Noel Goss in October 1953.

A member since 1964, Dorothy was honored as a Golden Girl of P.E.O. Chapter CU and she was a member of First Congregational Church and Collector’s Club.

She was preceded in death by her parents and her sister Lois.

A memorial service will be held at 11 a.m. on Friday, June 16, at First Congregational Church with the Rev. Shari Mason officiating. Interment will be at Oakwood Cemetery. Visitation will be at the church one hour before the service.

Memorials may be designated to the music fund at First Congregational Church.