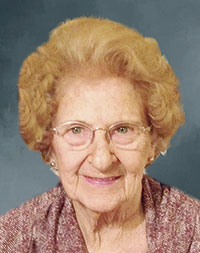 Dorothy Doris Demmer, 90, passed away on June 7, 2017, surrounded by her family at her home in Faribault, Minnesota.

Dorothy was born on June 30, 1926, the daughter of Hans and Ida (Sandsmark) Johnson. She was baptized and confirmed and, on Aug. 31, 1947, was married to Boyd W. Demmer at Le Sueur River Lutheran Church in New Richland, Minnesota. Upon graduation from New Richland High School in 1944, Dorothy attended Mankato Teacher Training and taught school for nine years until the family moved to Hayfield, Minnesota in 1957. In Hayfield, Dorothy helped in the family John Deere business, Demmer Implements Inc., taught Sunday school and served as president of Trinity Lutheran Church Ladies Aid. Dorothy also served as the president of the American Legion Auxiliary where she was a life member.

Dorothy was preceded in death by her son, Alan B. Demmer; by her parents; and by six brothers and four sisters.

The funeral service will be held at 11 a.m. on Monday, June 12, 2017, at the Trinity Lutheran Church, 104 First St. SE, Hayfield, with Pastor Paul Hauschild and the Rev. Myrwood Bagne officiating. Interment will be in Fairview Cemetery in Hayfield following the service. Visitation will be from 2 to 5 p.m. on Sunday, June 11, at the Boldt Funeral Home, Faribault, and one hour before the service at Trinity Lutheran Church, Hayfield on Monday, June 12.

In lieu of flowers, the family prefers memorials to Trinity Lutheran Church in Hayfield or The American Heart Association.