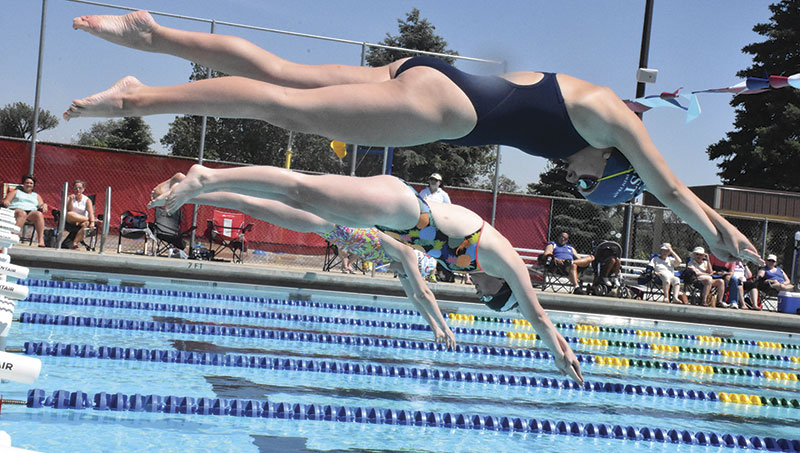 Girls dive into the Austin Municipal Pool on Saturday for the first of three Atlantis Swimming Federation meets during the summer in Austin. Photos by Jason Schoonover/jason.schoonover@austindailyherald.com

Austin, we have splashdown.

The first of three Atlantic Swim Federation meets was held at Austin Municipal Pool over the weekend, drawing 100 swimmers and teams from as far as St. Cloud.

Mark Vininski, the founder and owner of Atlantis Swimming Federation, has been pleased to bring the meets to Austin and the Austin Municipal Pool

The pool meets the federation’s needs nicely. Not is it one of the only outdoor, 10-lane pools in the state, but it also has a lot of deck space for set up and spectators, a separate diving well where swimmers can warm up before races and a splash pad where young spectators can cool off. 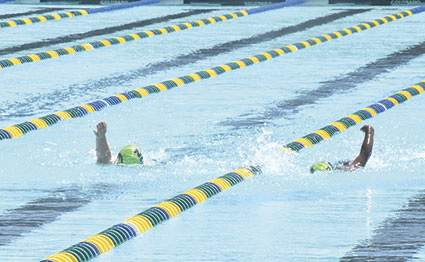 A duo comes down the lanes at Austin Municipal Pool Saturday during the first of three Atlantis Swimming Federation meets this summer in Austin.

Vininski has also found much cooperation in Austin, as he praised the city and Austin Park and Rec Director Kim Underwood for supporting and helping with the events.

The meets have been beneficial for Austin, too. As part of hosting the meet last summer, team Atlantis was able to get an $80,000 grant to get eight new swimming blocks and 13 new lane lines.

Plus, the meets bring people to downtown Austin, where they can shop or eat at businesses. On Saturday, Vininski said Piggy Blues BBQ was catering the event.

Atlantis will return to Austin on July 8 and 9 for another swim meet with about 100 to 200 swimmers.

However, Atlantis is saving the biggest for last this summer. On July 21-23, it will hose the Midwest Regional Meet, which could draw more than 500 participants. 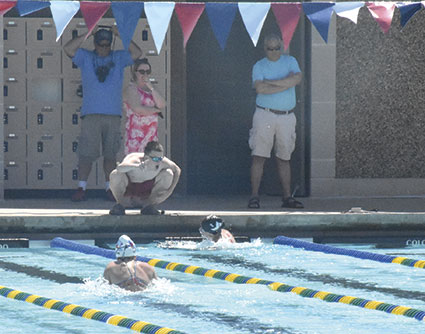 A man cheers on a girl swimming in the Atlantis Swimming Federation meet at Austin Municipal Pool on Saturday.