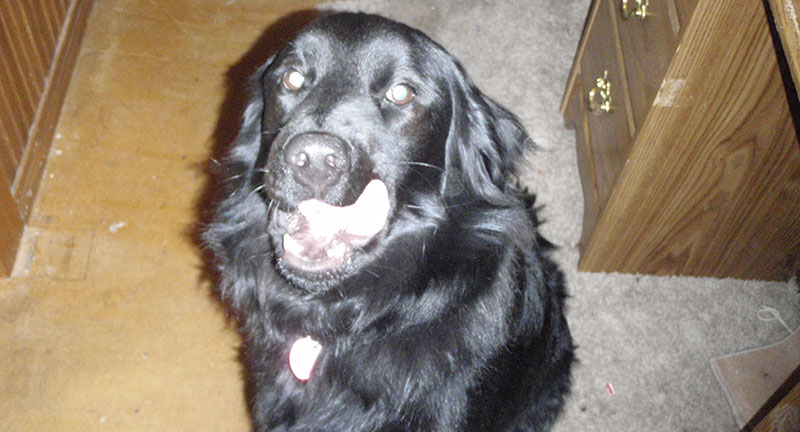 The Austin City Council has declared a Newfoundland mix named Oso a dangerous dog. The dog has bitten two people since November of 2016. Photo provided

The vote came after the dog, owned by Carrie Anker, bit two people since November of last year.

The dog was declared potentially dangerous after biting the first victim on Nov. 3, 2016. A public hearing was held on May 16 after the dog had bitten the second victim on May 3.

Assistant City Attorney Craig Byram provided incident reports and police reports with pictures from both incidents during the hearing.

Community Service Officer Ernesto Cantu testified that he had responded to the emergency room on May 3 after the second victim was bitten. He stated the victim had bruising and an open wound on her right arm, in which he could see the fat layer under the skin. The victim was familiar with the dog and had petted him in the past.

Cantu later confiscated the dog and brought him to the city pound.

Austin Police Lt. Dustin Wollenburg, who reviewed Cantu’s report, felt the dog met the criteria of a dangerous animal under Section 10.10 of the city ordinance.

Wollenburg advised that the dog should be destroyed and served the notice to Carrie, who appealed the request.

Carrie did not speak at the hearing; however, Marlene Anker read a statement on her behalf, stating that she did not agree with the decision to destroy Oso. She stated that the animal shelter had no reservations about placing the dog in a home and the dog may have felt threatened during the two incidents.

Carrie has 14 days to meet several conditions highlighted by the council on Monday. Failure to abide by these conditions could result in the city seizing and destroying the dog.

This is not the first time the council has dealt with a dangerous dog. In 2015, the council voted to euthanize Roc, a 4-year-old pit bull after it bit several people. But in a rare move, that decision was later reversed.

To keep Oso, Carrie Anker must follow the following conditions:

•Maintain an enclosure for the dog;

•Post clearly visible warning signs at the front and rear of the premises that alert the presence of a dangerous animal;

•Annually provide proof of public liability insurance of no less than $300,000;

•Muzzle and restrain the dog if outside the enclosure;

•Have an easily identifiable tag designating the dog as dangerous affixed to the collar as well as a microchip;

•Register the dog with the county within 14 days of its “dangerous” designation and provide proof to animal control; and

•License the dog and keep it up to date on rabies vaccination.

Under the ordinance, an animal is considered dangerous if it has:

•Caused bodily injury or disfigurement to any person on public or private property;

•Engaged in any attack on any person under circumstances which would indicate danger to personal safety;

•Exhibited unusually aggressive behavior, such as an attack on another animal;

•Bitten one or more persons on two or more occasions; or

•Been found to be potentially dangerous and/or the owner has personal knowledge of the same, the animal aggressively bites, attacks, or endangers the safety of humans or domestic animals.