Continuing a proud tradition of movies in Austin

The Historic Paramount Theatre was built in 1929 on the foundation of the Park Theatre which was destroyed by a tornado in 1928. The Park had been built in 1920.

Other Austin movie theatres over the years included the:

•Eagle on the East Side

•Outdoor on 10th Drive Southwest, what is now Midtown Auto (built in 1948) 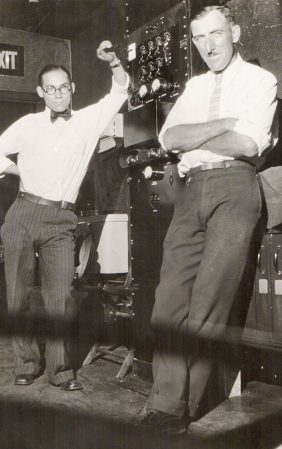 A pair of projectionists stand next to one of the projectors The Paramount Theatre. Photo provided

The first movie played at the new Paramount was “Fast Company,” directed by A. Edward Sutherland and starring Jack Oakie and Evelyn Brent. The movie was a comedy about egomaniacal baseball slugger Elmer Kane (Oakie) who falls for Evelyn Corey (Brent), an attractive actress who may or may not return his affections.

The last movie played while operating as a first-run theater was “The Godfather Part II,” a 1974 crime film produced and directed by Francis Ford Coppola from a screenplay co-written with Mario Puzo, starring Al Pacino and Robert De Niro that continues the multi-generational story of the Corleone crime family.

The Austin Area Commission for the Arts is pleased to announce that we began offering a $5 Wednesday movie night on June 21 at 7:30 p.m. with a screening of “Field of Dreams” starring Kevin Kostner. “Back to the Future” starring Michael J. Fox will be shown on June 28 and “Top Gun” starring Tom Cruise on July 5.

$5 Wednesday Movies will play year-round with occasional breaks for events such as the World Music Series in July. Five dollar movies are made possible by the recent installation of a state-of-the-art projector mounted in the projection room in the rear balcony of the theatre. Thank you to our supporters Norcostco and Erik Schindler for providing the equipment and installation at cost.

The Paramount is not licensed to screen first-run movies and we hope you’ll continue to go to the Cinemagic Theatre on 18th Ave NW for the latest movies. Instead, the AACA’s schedule will focus on classic, feel-good family movies. Your suggestions are welcome, please email to info@austinareaarts.org. We know you can watch nearly any movie on your TV, laptop or phone and we are on the hunt for those movies that become more magical on the big screen.

A few notes on logistics: purchase tickets for $5 Wednesday movies at the Paramount concession stand prior to the show. No advance ticket sales will be offered.