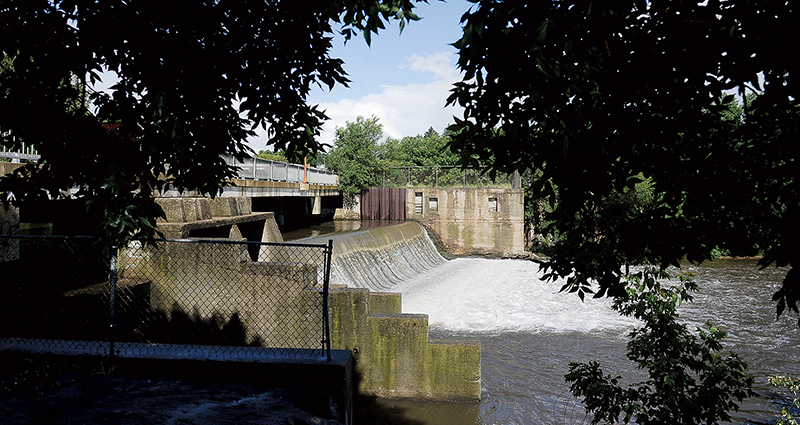 Water flows over the dam of underneath Fourth Avenue NE. The City Council recently voted in favor of applying for state bonding funds for two water trail projects. Eric Johnson/photodesk@austindailyherald.com

The city of Austin is continuing its push to get state funding for two planned projects for Austin waterways.

Both projects are part of the Cedar River State Water Trail.

In its request to fund the Fourth Avenue Riverview project, the city stated it would use the money to “enhance a stretch along the Cedar River State Water Trail within the city of Austin’s downtown area that has significant historical value to the city and offers a great connection point for recreational users on the river and the city’s paved pedestrian trail.”

The plans include creating a trailhead at the site of the former mill on the Cedar River, displays showing the community’s history, as well as rebuilding walls to aid in flood control and setting up a canoe/kayak portage below the Fourth Avenue dam.

The city stated it wishes to “create a recreational area near Mower County’s largest body of water – Ramsey Mill Pond – part of the Cedar River Water Trail” in its request for funding improvements at the Ramsey Scientific and Natural Area Site. The city wants to acquire former golf course land and some private residential property, which includes an historic railroad bridge, in order to “restore the railroad bridge and construct a paved pedestrian/bike trail through the acquired property and onto the rail bridge.” The goal would be to connect the area with the city’s trail system and the Shooting Star Trail. The city also intends to build a fishing platform and an amphitheater in the area.

The city had previously asked for state bonding money to fund the projects in 2016.

“Both the Senate and the House bonding committees came and toured the sites and we gave presentations on the two proposals to them,” City Administrator Craig Clark said. “We were unsuccessful in 2016.”

With the council applying and confirming their commitment to the projects, Clark said the next step is to work with the administration to get them into the bonding request to the Legislature.

“We’re still optimistic we’ll move these forward in the coming capital bonding vestment cycle,” he said. “Both of them would be an enhancement of the area and bring a connectivity of the public to those important areas. We hope the Legislature will take another look at the projects.”

Clark said the move also positions the city well, should other cities not use 2016 bonding money.

“In some instances, bond proceeds have been awarded and the communities said, ‘Thanks, but no thanks,’” he said. “The state wants to make sure the City Council is on record for supporting the project before they get too far down the road.”