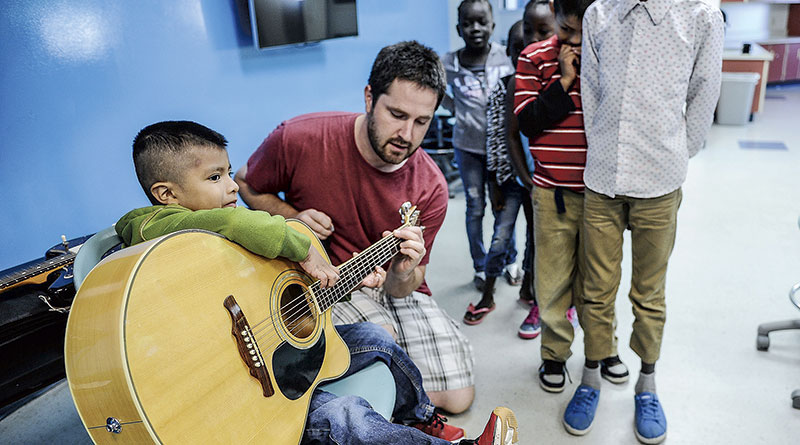 Jose Diego-Fellipe gets a taste of the guitar world during Neveln Elementary’s summer school program Tuesday. Photos by Eric Johnson/photodesk@austindailyherald.com

Summer school at Neveln Elementary School is not a “make-up” session when a student hasn’t done well during the regular school year.

Rather, it represents additional time for a student to maintain skills and broaden their background knowledge, according to lead teacher Maria Mickelson.

“Our program is not remedial in nature,” she said. “Instead, we work to maintain skills students have acquired during the regular school year. Many of our students made significant academic gains during the school years and we want to preserve those gains and make sure students don’t slide back academically during the summer.”

About 100 children in second, third and fourth grades attend three days a week, from 8 a.m. to 12:30 p.m. There is also an English Learner (EL) class. 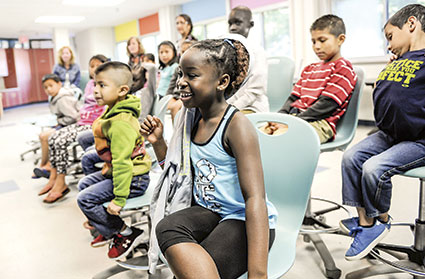 Tracey Akakpo smiles as she tries to remember her question during the Neveln Elementary summer school.

Children eat both breakfast and lunch at the school, free of charge.

Children attend upon recommendation of their classroom teachers, and represent the diverse nature of the school population, Mickelson said.

Focus of the classes is on multiple experiences. Students will participate in weekly science experiments, physical education, reading and math, writing, computer lab time, thematic lessons and guest speakers. At the end of the eight-week program, the children will take a field trip.

The curriculum also focuses on building background knowledge — a concept many don’t understand, said Mickelson. Building knowledge comes with having experiences; some children, she noted, are not able to travel widely or attend different events in the community.

“In order for new learning to occur it must be connected to something already understood — so building background is vital to student success,” Mickelson said.

Instructors will also work with students to build their academic vocabulary — in other words, those words used often to guide learners.

For example, Mikelson said that perhaps a student doesn’t understand a word like, say, “apply,” found in the directions of a test. If they do not understand the word they might not be able to complete a test or assignment.

So, “we focus on some high utility words that all learners need to know,” she said. 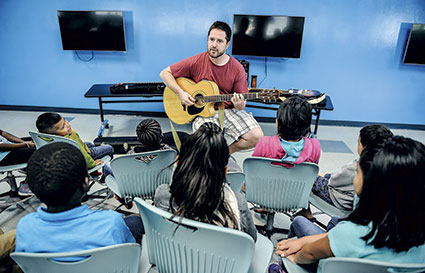 “We have had someone who brought animals; another time was about occupations,” Mikelson said. “A storyteller, scientists; we have a musician right now.” I.J. Holton instructor Clint Phillips even volunteered his time to come and sing with the students.

The Neveln program is twice as long as others serving the younger ages, and one of four held in the district during the summer months. Austin High School, I. J. Holton Intermediate School and Woodson Kindergarten Center all provide programs. The “boost up” programs at Woodson (through grade 3) and at I. J. Holton (fourth through eighth grades) run for a month, starting on July 24 and ending just before the regular school year begins. The four-day-a-week programming emphasizes grade level practices with a life skills component, said I. J. Holton site leader Jill Rollie. Hands-on learning is emphasized, she added.

Attendance comes on the strength of teacher recommendation.

“And we stress the social aspects,” of skill-building, too, she said, that focuses on motivation/effort and empathy-building.