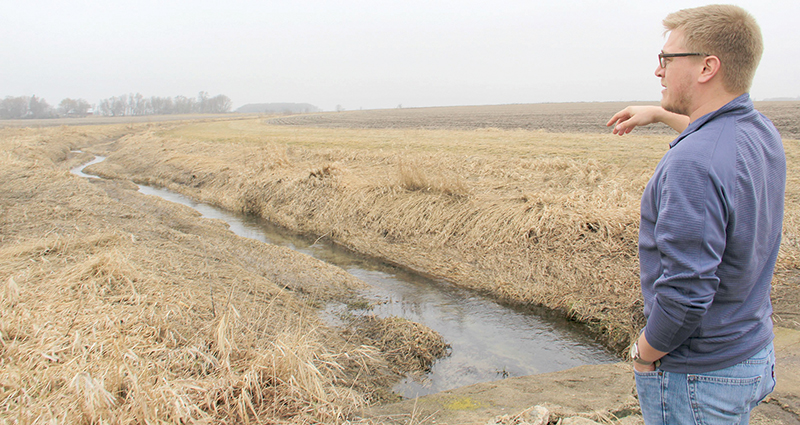 Aaron Gamm of the Mower County Soil & Water Conservation District points at land along Dobbins Creek just off 610th Avenue in Red Rock Township southeast of Brownsdale on Monday. Though an estimated 94 percent of Mower County is in compliance for a buffer law passed year, SWCD staff will be contacting those landowners about non-compliant land in the coming months along with options for how they can correct it. Jason Schoonover/jason.schoonover@austindailyherald.com

The push to bring farmland into compliance with the state buffer law is staying local, and leaders are trying to make sure landowners know it pays to come forward as soon as possible.

The Mower County board unanimously voted Tuesday to keep the county as the enforcement agent of the incoming law to require vegetative buffers along streams and rivers. This means landowners will work with the Mower County Soil and Water District instead of representatives out of St. Paul to come into compliance.

But county staff and commissioners are more interested in working with landowners than they are in pursuing the extremes of enforcement.

“We’ve tried to make this a positive program rather than just coming in on the back end of all this with a stick,” Mower County Soil and Water District Manager Justin Hanson said.

For the last few years, the SWCD has led the buffer strip push and has been educating landowners to avoid issues down the line. Hanson urged landowners to approach his office as soon as possible, because that way they can look into options.

SWCD is focused on programs and services landowners can utilize, like the Conservation Reserve Program (CRP) for set-aside land.

“Come in and get your CRP started,” Hanson said. “That has been our message from the beginning, and it needs to be our message going forward. We can’t have these people waiting because I don’t want them to miss out.”

Right now, it’s still voluntary participation, knowing the regulation is coming later. That gives the landowners more of a say in how they move toward compliance.

But Hanson noted someone still needs be “on the back end to make sure that it’s followed,” he said. To Hanson, a local effort toward compliance made more sense than someone coming from St. Paul.

Preliminary numbers show the county getting about $130,000 this year and $160,000 next year from the state for enforcement.

Many years of debate around buffer strips is some cause for concern. However, Hanson said people can pretty much be assured the buffer laws are moving forward.

“I think we’ve beat this horse to death. Everybody’s ready to just move on,” Hanson said.

Nelsen supported Mower County’s role as enforcement agent; however, she voiced concern about long-rang enforcement should farmers stop adhering to the limitations years down the line. Her concern is whether money would be available then.

County Coordinator Craig Oscarson warned that funding stream could end after a few years. He suggested the board set aside the money from the state for future uses, should such issues arise.

While Mower County is about 95 percent compliant with the buffer law, Hanson admits the remaining 5 percent could be tedious. That could still affect a lot of landowners working with small pieces of land.

But the SWCD has been progressive in the process, getting the word out early to homeowners to start the process early with the intent of avoiding more stringent enforcement methods later.

Originally, plans for the buffer strips had to be in place by Nov. 1, but now people who’ve contacted the SWCD can ask for additional time — until next June — if they come forward before November.

CRP is a federal reserve program to give farmers an incentive for setting aside sensitive lands and habitat. The contracts last 10 to 15 years.

“It makes it a little easier for those farmers to put some buffer in,” Hanson said.

The buffer law started out as a firm 50 feet, but now Hanson says it’s a more flexible 50-foot average with a minimum of 30 feet.

“That little bit of flexibility is actually really helpful,” Hanson said. “We don’t have to go knock somebody over the head for 10 feet of buffer. We don’t want to do that — that’s bad government, really.”

That gives flexibility, and gives landowners some say in how they do things.

As Hanson noted, 50 feet isn’t always good for all.