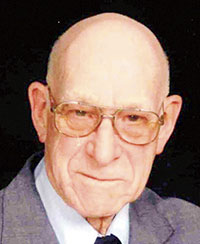 Bernard Emil Lammers, 91, of the Rose Creek, Minnesota, and Adams, Minnesota areas, died Tuesday, June 13, 2017, at Mayo Clinic Health System-Austin, after a brief illness and one day after his 66th wedding anniversary.

Bernard was born July 19, 1925, in Fulda, Minnesota, to Theodore and Katherine (Holles) Lammers. He was the youngest of seven children. At a very young age, his family moved to the Rose Creek area.

On June 12, 1951, he was united in marriage to Virgina Fruth. To this union four children were born: Jeanne, Diane, Monica, and David.

Bernard was a farmer his entire life. He milked cows and raised cattle. There were also hogs and chickens. Bernard was a good steward of the land.

He was a member of the Adams Rural Fire Board, the Knights of Columbus, and St. Peter’s Catholic Church in Rose Creek. Bernard enjoyed spending time with family and friends. He was an avid woodworker and enjoyed playing cards.

He is preceded in death by his parents, Ted and Katie; wife, Virginia; brothers, John, Frank, and Brother Felix; two sisters, Anne Meyer and Agnes Weber; and son-in-law, Doug Parmenter.

A funeral Mass will be celebrated 3 p.m. on Sunday, June 18, 2017, at St. Peter’s Catholic Church in Rose Creek with Father Swaminatha Pothireddy officiating. Friends may call from 1 p.m. until the time of the service at the church on Sunday.  Interment will be in St. Peter’s Cemetery.

Mayer Funeral Home is in charge of arrangements. Condolences may be left online at www.mayerfh.com