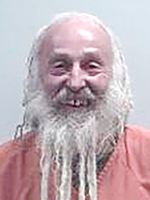 According to court documents, an adult female received a letter from Bellrichard in late December, even though he was convicted of stalking her and violating a harassment restraining order and sentenced to three years in prison in 2014.

The letter contained a greeting card and an extensive letter, which referenced seeing the victim at a sporting event and that she was “still as lovely as ever.”

The letter went on to talk about the two being together and referenced sending a Christmas and New Year’s card and package to the victim.

Upon receiving the package on Jan. 3, the victim called police to open the package. Inside, officers found two books: “The Infamous Dakota War Trials of 1862: Revenge, Military Law and the Judgment of History” and “Cy Thompson: the Generous Embezzler.”

The package also included a card with a picture of a bicycle — Bellrichard left a bicycle at the victim’s residence during the 2014 stalking case.

Another piece of mail arrived Jan. 4 in which he talked of the potential for he and the victim sharing their love “in the marital act.” It went on to discuss freedom and faithfulness.

The victim told law enforcement she did not want contact with Bellrichard and was uncomfortable doing routine tasks because of his actions.

Police executed a search of Bellrichard’s rural Austin home on Jan. 6 and arrested him.

Bellrichard — a much-recognized face around Austin — was convicted in 1991 for threatening public officials. He sent more threatening letters to public officials while in prison, which added seven years to his sentence. He was also suspected of setting fire to the homes of two district judges in 1988 and 1989, but was acquitted of those charges.

Bellrichard is scheduled for sentencing Aug. 10.