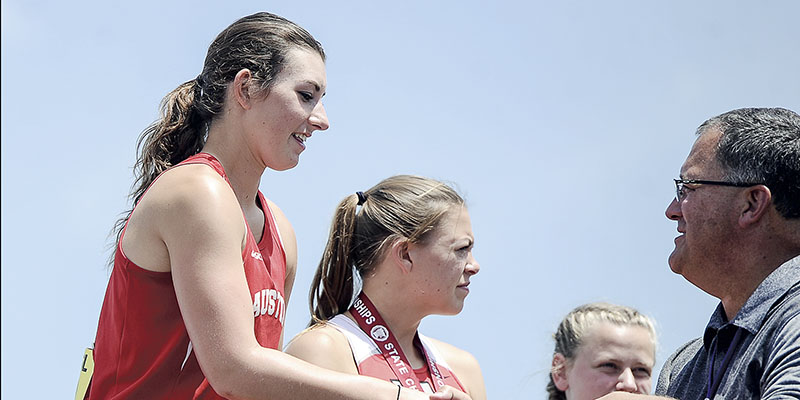 Austin Amber Hansen is congratulated and receives her medal after she finished fourth in the discus at the Minnesota Class AA State Track and Field Meet Friday at Hamline University in St. Paul. Eric Johnson/photodesk@austindailyherald.com

ST. PAUL -— Austin senior Amber Hansen wasn’t even sure if she’d be throwing the discus in the Minnesota Class AA state meet this spring, but she certainly made the best of her opportunity in Hamline University Friday.

Hansen re-set her own school record in the discus with a distance of 128 feet, one inch as she finished in fourth place overall in her first ever appearance at state.

Hansen’s record setting throw came at a time when she needed a throw of at least 117 feet to advance to the finals. She had thrown a distance of 107 feet, 10 inches and a foul on her first two throws in the preliminaries. Hansen was able to land a clutch and record-setting throw just inside the foul line to land herself on the podium. 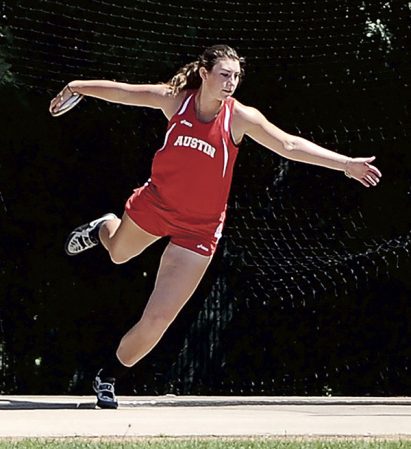 “I had to relax and let myself do the work. I kept my mantra going and I finally pulled one out,” Hansen said. “It’s pretty amazing just to be able to throw here in general. I wasn’t expecting to come here in discus, but my goal was to get on the podium.”

Hansen, who will compete for the University of North Dakota next season, is the first Austin female thrower to compete in state since 1995.

“I felt like I went out there and gave it my all and I hope that I did [my school] justice,” Hansen said. “I thank everyone who’s pushed me through the years.”

Hansen will compete in the shot put in the Class AA state meet Saturday.

Amanda Anderson of St. Francis won the meet with a distance of 154 feet, seven inches.