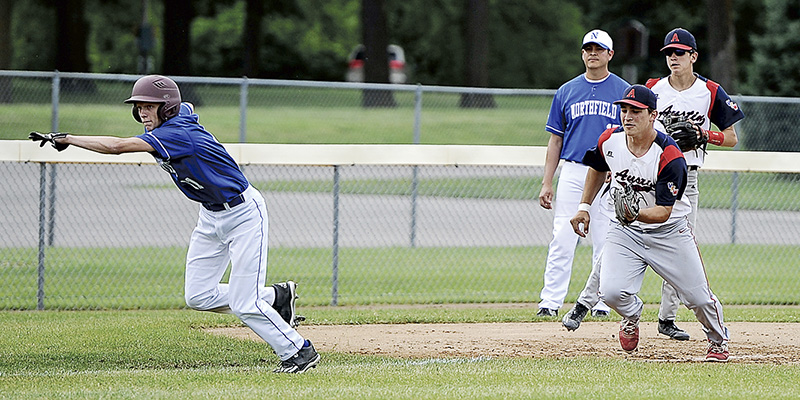 The Austin Post 1216 VFW baseball team had a slight letdown after a strong weekend when it suffered its first District loss of the season in Marcusen Park Tuesday. After taking second place in the Blaine tournament, Austin started slow and lost 8-3 to Northfield.

Austin committed a key miscue in top of the first inning as Northfield jumped out to a 4-0 lead and Northfield added four more unearned runs in the top of the fifth to go up 8-1.

“This is a game we need to learn from, remember it and move forward,” Austin head coach Joe Ciola said.

Riley Wempner allowed just two earned runs in four and two-thirds of an inning and Michael O’Connor pitched two and one-thirds inning of shutout baseball in relief for Austin. Drew Copley doubled in two runs to pull Austin within 8-3 in the bottom of the fifth, but the last seven Post 1216 hitters went down in order.

Ciola said Austin (16-4 overall, 8-1 District) needs to come out with intensity on a consistent basis.

“We’ve got to come ready to play,” he said. “Tonight they showed up and they were physically here, but they weren’t really here mentally. You could see that with their at bats and you could see that from time to time when we weren’t making routine plays.”