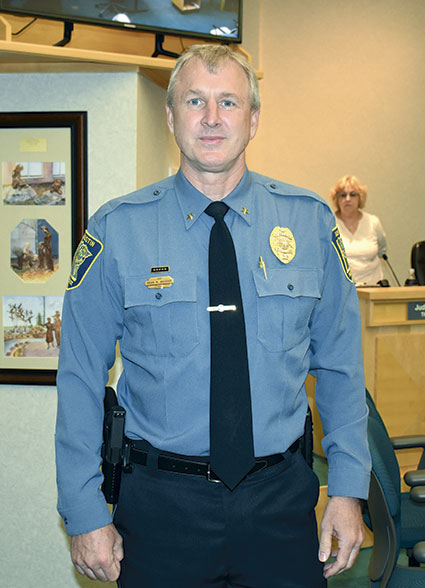 The Austin Police Department started wearing new uniforms on June 1. These uniforms are replacing the previous style worn by Austin police officers since 1962.

“[Changing the uniforms] has been something we’ve discussed over the past few years,” said Austin Police Chief Brian Krueger. “It was early this year when the decision was made with the union to change out the uniforms.”

The officers paid for the new uniforms out of their uniform allowances.

While the old uniform shirt was a very light blue with dark blue pockets and lapels, the new uniform is a darker blue, called French blue, and is one solid color. The shirts are also made from a different material, which, according to Krueger, the officers find more comfortable.

“When it’s warmer out, the sides are more breathable,” he said. “A lot of the officers wear their tactical vests outside their uniform shirt and it actually fits inside the vest and the vest matches the exact color of the shirt. It fits much better.”

Krueger also stated the new uniforms include dress pants to wear for court when they are not on street duty. For street duty, the officers wear battle dress uniform pants.