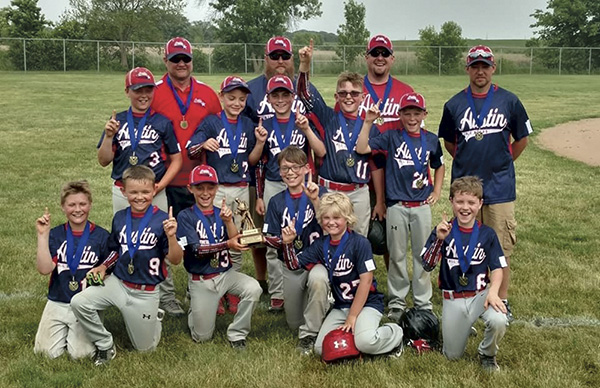 The Austin 10U Jays All-Stars recently stayed unbeaten as they won the Waseca tourney. Photo Provided

The Austin Jays All Stars remained unbeaten in season play as they won the Waseca Tourney, where they outscored their opponents 31-5.

“We hit the ball very well, but again, too many defensive mistakes. On the bright side, the kids are showing improvement each game and that’s all we can ask” said coach Jeremy Wilson.

CMG All Stars  competed in the Shakopee Tourney and they qualified for all three state tourneys.

“Overall we played very well” said Coach Dan Ransom. “A break here or there, and we could have been in the title game, but qualifying for all three state tourneys is a accomplishment.”

The Local 9 All Stars finished 2-1 in a rain shortened tourney in Stillwater.

“Kids played hard. It’s tough when games are shortened because of weather. It puts a lot of pressure on the kids” said Coach Brock Meyer.

The Austin Eagles All-Stars are heading out this week for play in the Slumpbuster five-day tourney in Omaha, Nebraska. The

Eagles were washed out after one game in the Lakeville tourney.