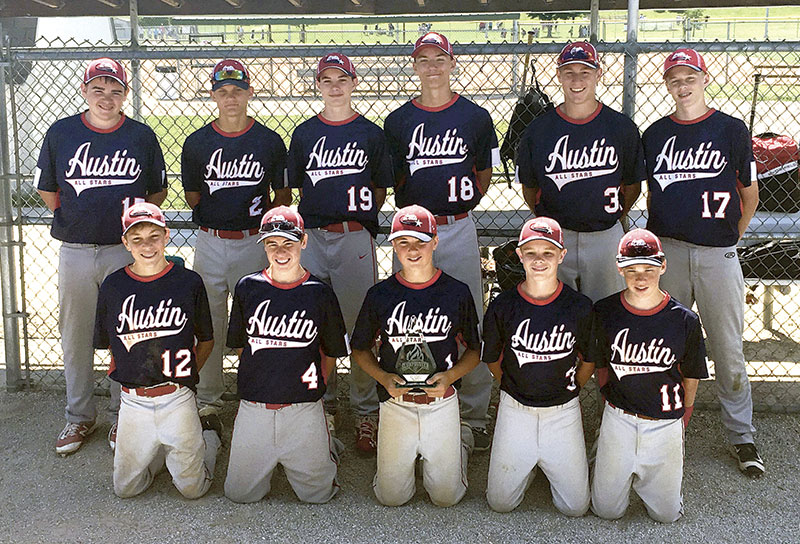 The Austin Eagles All-Stars, seeded 22nd out of 34 teams after bracket play in the Omaha Tourney, won their first three games in championship play, then lost the title Game to Kansas City.

“We had an extra innings semi-final game and it put a strain on our pitching,” said coach Brad Walter. “But we were happy with our finish and every player contributed.”

The Austin Jays All Stars had their unbeaten season come to a end as they lost the title game, taking second in the Albert Lea tourney.

Logyn Brooks, Tayte Berg, Dane Schara and Gahvin Schafer led the hitters and Brandon Kuhnke , Easton Meyer, Cale Tupe, Berg and Schafer pitched “Our players battled back after losing the first game of the tourney, but we ran out of steam in extra innings of the championship game” said coach Troy Schafer.

The Local 9 Austin All Stars Placed fourth in the Albert LeaTourney.

The 13 year old Austin All Stars took second in the Waseca tourney and won a spot in the MSF State Tourney.

“Our pitching was outstanding” said coach Jeremy Wilson. ” Our

Joey Schammel, Lathan Wilson, Teegan Finley and Garrett Lahann contributed with their hitting and pitching and Donavon Felton and Bryce Fisher also were outstanding on offense.

This Weekend all teams, except the Eagles, will be in the 39th Annual All Star Tourney at Todd Park with play starting 8:30 a.m. Saturday and running all day Saturday and Sunday. Admission is free.

Cine it all: Vikings safety keeping perspective in 1st camp

‘Our Time’: Hayfield duo is looking to set up a historic run