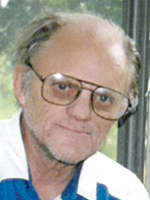 He was born Jan. 31, 1943, in Austin, the son of Reinhold and Frances (Stevens) Augustin. Art attended Austin Public Schools. He had several jobs including as a forklift driver for Cedar Valley Services and working at a grocery store in Blooming Prairie, Minnesota. He married Ann Maricle. They had a daughter, Ginger. They were later divorced. He married Debra Hyland. They had a son, Randy. Debra died in 1987. He married Bertha Olson, and she died in 2016. He enjoyed fishing, golfing, bowling, playing cards and calling Bingo at the Cedars. He will be missed by his relatives and friends.

A memorial service will be held at 2:30 p.m., on Thursday, June 29, 2017, in the Community Room at The Cedars of Austin. The family will greet friends at 1 p.m. until 2:30 p.m. Interment will be in Grandview Cemetery at a later date. Services prearranged and performed by Worlein Funeral Home of Austin. Condolences may be expressed to the family online at www.worlein.com.