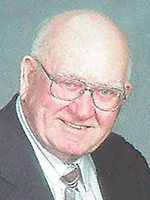 Arnold lived all of his life in Waltham and worked in plumbing and heating. Arnold enjoyed fishing and his cabin on Lake Vermillion.

Visitation will be one hour before the service at the church.

Interment will be in the church cemetery with Military Honors by the Hayfield American Legion, Rothie Post 330.