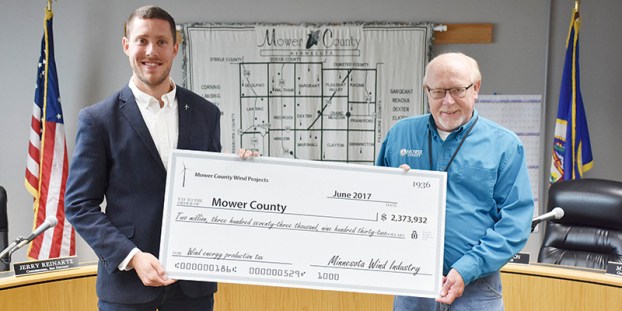 Chris Kunkle (left) of Wind on the Wires presented a ceremonial check to Mower County Board of Commissioners Chairman Tim Gabrielson on Friday. Michael Stoll/mike.stoll@austindailyherald.com

Mower County led the state in 2016 in money received through the wind energy production tax, much of which goes to offset property taxes.

“Wind has become important to Mower County, its tax payers and the environment,” Gabrielson said.

Under Minnesota law, wind energy power systems are exempt from state sales tax. However, counties and townships receive money through the production tax, which is based on the energy produced.

The amount was the largest wind energy production tax payment made in Minnesota and was an increase of 26.5 percent from last year, in part to 2016 being the first year Mower County received production tax funds from the more than 80 towers of the Pleasant Valley Wind Farm in the county. 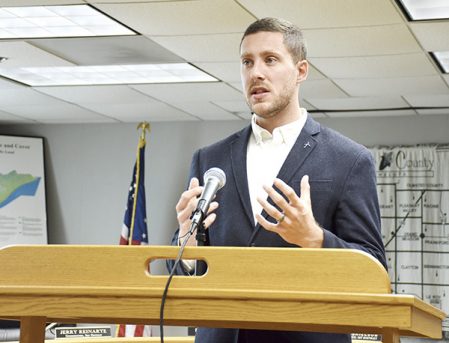 Chris Kunkle, of Wind on the Wires, presented a
a ceremonial check Friday to Mower County to represent the county’s 2016 wind energy tax revenue.
Michael Stoll/mike.stoll@austindailyherald.com

Grabrielson broke down how the tax revenue would be used.

“$400,000 from the Pleasant Valley system goes strictly for roads and bridges,” he said. “The rest of the money goes strictly to tax relief to keep us from having to raise taxes.”

State Sen. Dan Sparks and Rep. Jeanne Poppe, both DFL-Austin, both attended the ceremony, and Sparks called wind energy a boost for the community.

“That revenue helps our entire community because it helps keep the lid on property taxes, helps pay for road improvements, and supports community projects,” Sparks said. “We need to continue supporting wind energy development in Minnesota.”

“Not every county can benefit [from wind energy] to the extent that Mower County does,” Poppe said. “We’re lucky that we continue to have the wind production tax. That is something that we have always promoted as important to our county, townships and schools. Everybody benefits from it.”

“Wind energy is a true success story for Minnesota,“ Kunkle said. “As utility prices in wind drop, more counties are embracing it.”

Ross Lexvold, community relations and economic development manager for Xcel Energy, stated that Xcel Energy currently has 19 percent of its power generated by wind power, a number the company hopes to increase to 34 percent by 2021.

The Pleasant Valley System, owned by Xcel Energy, is located in Sergeant, Red Rock and Dexter townships. It is one of the largest wind farms in Mower County with over 80 turbines, plus more in Dodge County.

A new St. Ansgar, Iowa-based theater company, whose ranks include talented college performers from across the country, will soon bring... read more