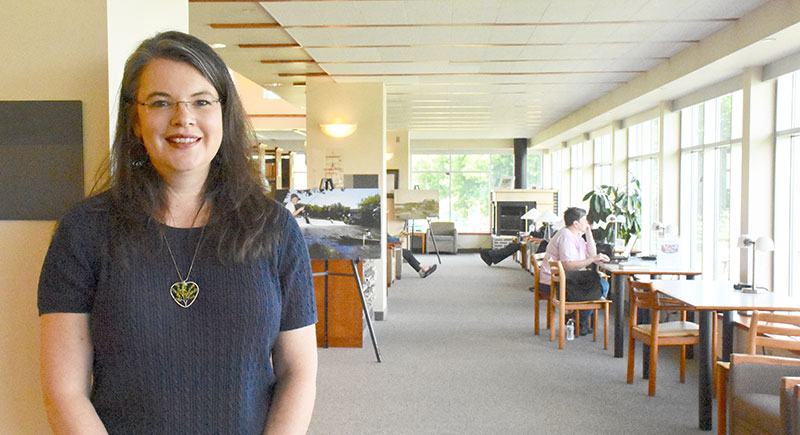 Julie Clinefelter is more than happy in her new job as director of the Austin Public Library. She began her duties in mid-May, after serving as technical services librarian. Deb NIcklay/deb.nicklay@austindailyherald.com

Julie Clinefelter knew from the time her family moved to town in 2003 that the Austin Public Library was a good place to be.

“I was surprised when I first saw it, at how large it was, what a nice place it was,” she said. “We really love being in Austin, its diverse nature; there are so many things going on.”

Today, Clinefelter heads up 16 full- and part-time staff members who make the library that great place. She began her duties as director in May, succeeding Ann Hokanson in the position.

She first worked for the Austin library shortly after her family’s move here, serving as a substitute, and then worked a couple of nights a week cataloging books. In 2013, she was hired as a media assistant at I. J. Holton Intermediate School. In 2014, she returned to the public library as technical services librarian.

She credits a local leadership course — Leadership Austin — and another given through the library system, for prompting her decision to apply for the director’s job.

“I have been involved in the community for a long time, in so many ways … I thought I would enjoy the chance to steer the library,” she said.

So far, so good, she said. She is busy and enjoying the challenge.

She especially wants everyone to know what the library can do for them.

“We can’t do taxes; we cannot offer legal advice,” she said. “But did you know we have two telescopes you can check out? We have the beautiful St. John’s Bible,” a good collection of books for all ages, audiobooks, music, and multiple “hot spots” that offer internet service to those who would not otherwise have it.

Clinefelter, 44, a self-described “closet science fiction fan” (her favorite? Raymond Feist) is a California native who earned her undergraduate degree in English and history at Graceland University in Lamoni, Iowa. Later, she earned her master’s degree in library science at St. Catherine University in St. Paul. She worked for a short time in a public library in Apple Valley and realized she had found her vocation.

“At first I thought I would work in an academic library, but I found I liked working in the public setting, helping the people. Every day was different,” she said.

The varied requests and services are part of its charm.

“I love the fact that people come in and are so grateful when you can answer the simplest question,” she said. “Then we have other questions where we go, ‘How in the world can we answer that?’” she added with a laugh. “Regardless, we want to answer all those questions.

“You really can find anything at a library. I love the fact that you set out to learn about one topic, and you end up learning all sorts of other things.”

Keeping an up-to-date collection, extending the library’s reach in the public and providing pertinent programming are all good things that she wants to maintain. She has a staff, she added, “who have done a fabulous job” during the interim between directors. She also applauded the work Sara Steinhoff did as the interim director.

Together, she said, they can continue to provide for patrons and work to raise library’s profile.

“We have a variety of services, many of which people don’t know about. We want them to realize what we do have and utilize those services,” Clinefelter said.