A mixed bag: Austin is still seeking a solution for a firefighter pension issue, but the city got modest help in LGA, water treatment 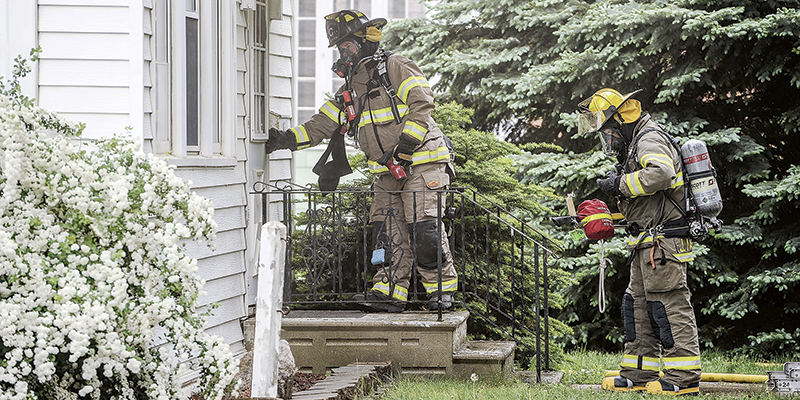 Firefighters prepare to enter a home at the corner of Fourth Street and Third Avenue Northwest a few weeks ago. Herald file photo

The end of the 2017 legislative session brought a mixed bag for the city of Austin.

While the city received a $134,131 increase in local government aid (LGA) and the bonding bill included some relief for water treatment programs, the city was not able to secure relief for a firefighter pension issue.

Here are some ways the city will be affected by the state bonding, budget and tax bills:

One of the casualties of the legislative session was relief for a pension issue for Austin’s volunteer firefighters, which was attached to a bill vetoed by Gov. Mark Dayton.

The city is now responsible for paying $214,000 to volunteer firefighter pensions due to a 2013 state change, despite work to correct the issue throughout the session.

“There was a special provision that allowed us to take our state fire aid and pay the amount that the bylaws from the Part-time Relief Association requires the city to give them,” said Austin Fire Chief Jim McCoy. “We could use the difference between the state fire aid and what’s owed to the relief association to offset the full-time fire department pension. That was wiped away in 2013, unbeknownst to us.”

According to City Adminstrator Clark and McCoy, the city was told about the change last year. The city worked with Rep. Jeanne Poppe and Sen. Dan Sparks, both DFL-Austin, to correct the issue. While a fix passed in the Senate, the House attached it to a bill that Dayton eventually vetoed.

Clark said the city is talking to the state auditor to seek a solution.

“There is the understanding that this provision passed on a bipartisan basis and the veto of the bill is related to the preemption provisions, not the pension provision,” he said.

“There’s always hope that if another special session is called, there would be a miracle and our portion would not be attached to something,” McCoy said. “The pension bill was vetoed last year, and this year, we’re without another pension bill.”

Also passed in the budget was a bonding bill that included $136 million for statewide wastewater, drinking water and storm water programs to help assist local governments in complying with recent regulations. Recent changes in regulations of wastewater treatment rendered the Wastewater Treatment Plant in Austin out of date and, according to a recent analysis by Minnesota Management and Budget, the cost to upgrade is a staggering $77 million.

“There is supposed to be some regulatory relief, but I am not familiar with what that is right now and how it might translate to the permit renewal for the city and for what expenses we will have for upgrades at the plant,” Clark said. “Having state partnership is vitally important to keep rates down for constituents. We’re still trying to find out specifics of how these things translate down to us with the legislation closing.”

Austin will receive a small increase in LGA in the fiscal 2018-19 state budget.

The budget, passed by the legislature on May 26, and signed by Gov. Mark Dayton on Tuesday, included a tax bill with a statewide increase of $15 million in LGA funding. Of that amount, Austin will receive a $134,131 increase for an overall total of about $8.1 millions in 2019.

But the requests are far below what cities were asking for. The original statewide increase request was $45.5 million, which would have given Austin and increase of $425,248.

“We felt that was a fair ask given the budget surplus that the state had,” Clark said. “LGA was the Coalition of Greater Minnesota Cities’ number one priority. We believed that if they wanted to deliver on helping Greater Minnesota, that would have been a good route.”

Last year’s tax bill saw a $20 million LGA increase. Clark said that, while the city is grateful for the increase, the reduction is “kind of concerning.”

City staff have long stressed the importance of LGA to the city budget, as Director of Administrative Services Tom Dankert noted last December that LGA made up about half of the city’s $15.9 million 2017 budget.    “Half of it comes from the state of Minnesota,” Dankert said in December. “So if the state of Minnesota for some reason changes the allocation of dollars they put into local government aid, that has a severe impact on the city of Austin.”