A bridge for communication; Phrazer system will engage parents, students at Austin schools 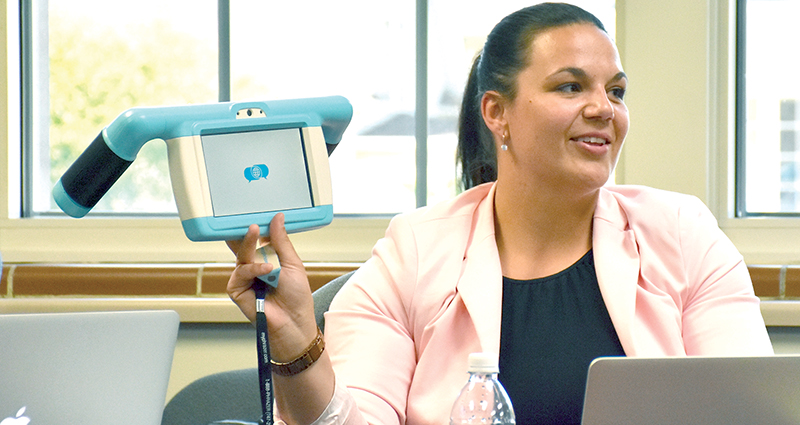 A new multilingual communications system will be piloted in Austin this fall to help parents of different cultures become engaged with their child’s education.

The system, called Phrazer, was developed by Duluth-based GeaCom Inc. and was first designed to be used in healthcare settings so that providers would communicate with immigrant populations.

Now, the company is working in collaboration with Austin Public Schools. The system, which will be able to speak in 51 different languages, will be piloted this fall with third graders at Neveln Elementary School.

GeaCom CEO Mat Johnson and Senior Account Manager Katja Hansey spoke to the Austin School Board about the system Monday during a board meeting. GeaCom began is work on the system with the district and Neveln educators last spring.

The hand-held device, not unlike those seen in a gaming system, is outfitted with a video screen that speaks to the holder in their native language. It uses what is called the CITE (Communication and Information Theory Empowered) methodology. There will be 12 of them at work in the district.

The system, with the help of the parent responses, collects information needed to help his or her student, such as required information on immunizations and health conditions. It helps engage the parent through the school year and provides communication ability at parent-teacher conferences. 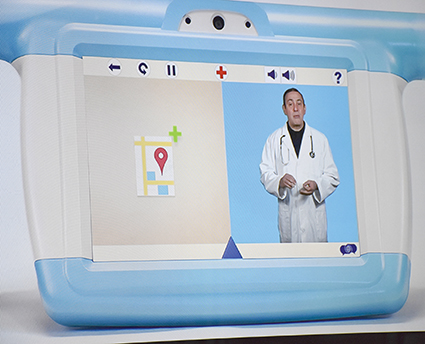 An example of a Phrazer device at work; the holder and image on the screen converses in the holder’s native language. This is an example for a healthcare setting.

Even more than that, said Johnson, it gives the holder privacy and the comfort of knowing they are involved, just like any parent, in their child’s education and well-being. The information gathered will help strengthen the system, as more fine-tuning will be done for cultural nuances.

Johnson said the system was first implemented with Mayo Clinic Health System “and has made a significant impact” in helping healthcare staff collect important information from immigrant patients.

“And it engages on a much more human level than technology can,” Johnson said, noting that the conventional method is to give a patient paper forms that often cannot be read due to illiteracy or a language issue; with a Phrazer, a person actually speaks with the holder in their own language. Depending on responses, the device will provide the right information and offer resources as well.

Johnson noted the device has been tested with the World Health Organization, the military and in other venues; among other awards, it earned the Gold Award in 2011 in the internationally-renowned Edison Best New Products Award competition.

Initial use in Austin will engage English and Spanish-speaking parents, and languages will be continually added, and will reach out into all schools.

The system has no cost due to the collaboration factor between the school district and GeaCom, Superintendent Dave Krenz said after the meeting. Eventually, there will be a per-device cost that will be paid through the district’s general fund.

Johnson said the board should be proud of its commitment to address language and cultural challenges “more effectively … and build bridges of communication.”

Krenz added that as better communication is established  “the more those parents are going to be active in the educational community.”

Board members praised the collaboration, and were clearly impressed with the new avenue of communication.

“We are always looking for ways to overcome the student language barrier,” said Chairwoman Angie Goetz. “We are very excited about this.”