75 Years of Progress in Science; The Hormel Institute celebrates 75th with International Conference 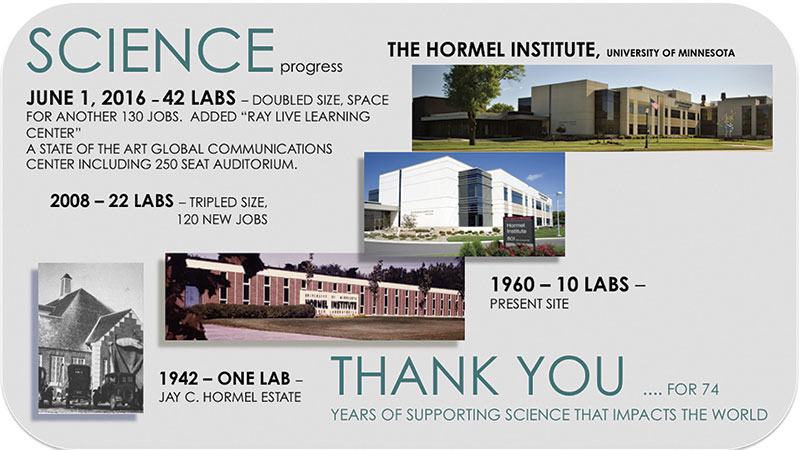 Leaders from across the State of Minnesota, University of Minnesota, The Hormel Foundation, Hormel Foods Corporation and region will gather at The Hormel Institute today to officially celebrate 75 years of progress in scientific research.

The celebration welcomes scientists to the fifth Hormel Institute International Cancer Research Conference, to be held in the Ray Live Learning Center with 150 invited guests, including representatives from University of Minnesota, Mayo Clinic, State of Minnesota and community supporters.

The two-day cancer conference will bring together 150 scientists from the Institute and invited speakers who together move cancer research forward. 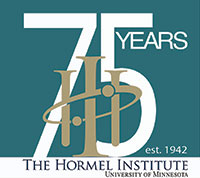 “The Hormel Foundation is proud of the support we have been part of the last 75 years,” said Gary J. Ray, chair of The Hormel Foundation.  “The Hormel Institute is recognized as one of the leading research facilities in the world. Jay Hormel’s insight is still going forward after 75 years.”

Jay C. Hormel founded The Hormel Institute in 1942, and research began in converted horse stables on the Hormel family estate. In 1960, the Institute moved to its current location in a one-story brick building containing 10 laboratories. It tripled in size in 2008, adding 20 state-of-the-art labs and renovating the 1960 building with a major transformation and new lobby.

One year ago The Hormel Institute doubled in size again with the addition of the Ray Live Learning Center and another 20 labs.

The 2008 expansion also doubled the number of faculty and staff at The Hormel Institute, and the 2016 expansion made room for an additional 130 positions to be added over the next few years. The number of research sections has tripled to 15, and the Institute is poised to add more with two new section leaders coming within weeks.

Faculty will continue to be added to  establish new and innovative research sections in the newly-expanded lab space. Publishing in top tier journals and partnership with “Nature,” the world’s leading scientific research journal, through the Institute’s own “Precision Oncology” journal, grows The Hormel Institute’s reputation. Thousands of visitors tour The Hormel Institute annually and growing collaborations globally continues.

The International Center of Research Technology also continues to expand with cutting edge enhancements added to The Hormel Institute’s technology. The major investment of adding the Titan Krios cryo electron microscope (creating the CryoEM lab) as well as worldwide telecommunications technology for the Ray Live Learning Center has been also added. Clinical trials at The Hormel Institute will begin for the first time in history later this year with the 2016 expansion’s new doctor/patient labs and translational research section opening up.

“We are deeply thankful and honored to have the generous support of The Hormel Foundation, our leaders and our community who join us in accelerating answers to cancer,” said Dr. Zigang Dong, executive director of The Hormel Institute, University of Minnesota.

With the annual support from The Hormel Foundation, 100 percent of every donation directly funds today’s cancer research.