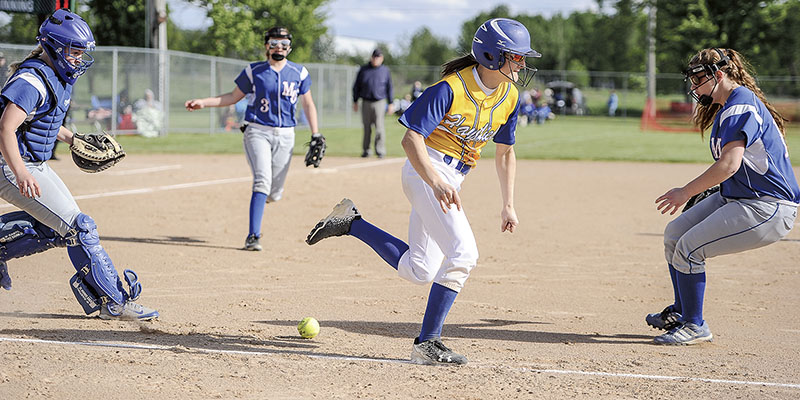 Hayfield’s Jenna Jacobsen races down the line for a bunt single against Mabel-Canton in the Section 1A Tournament at Todd Park. Eric Johnson/photodesk@austindailyherald.com

The Hayfield softball team faced its first real test of the postseason, and it was able to use the long ball to get past Mabel-Canton 7-3 in the Section 1A semifinals in Todd Park Tuesday.

The Vikings (17-6 overall) trailed for the first time this postseason when the Cougars took a 1-0 lead on a dropped fly ball in the top of the third inning. Hayfield was quick to respond when Maggie Streightiff belted a three-run homer over the left field fence in the bottom of the third. 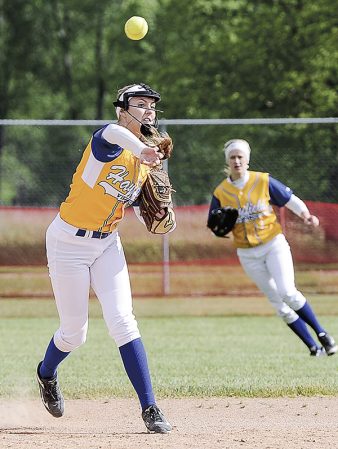 Hayfield’s Carrie Rutledge fires across the diamond for an out in the first inning against Mabel-Canton Tuesday in the Section 1A Tournament at Todd Park. Eric Johnson/photodesk@austindailyherald.com

Kate Kruger added a two-run homer in the fourth to put Hayfield up 5-1.

“Every body gets pumped up when we hit home runs and we needed some, because after the first couple of innings we were kind of down,” Kruger said.

The Cougars had 12 runners reach base and they used three doubles to score two runs in the top of the seventh inning, but Hayfield eighth grade pitcher Caitlyn Hendrickson was able to hold on and pick up the win. 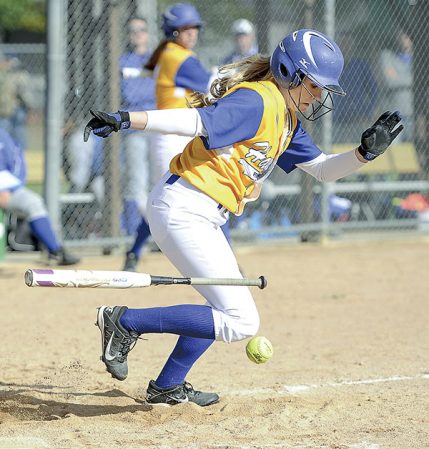 Hayfield’s Lexi Dudycha tries to avoid the ball after her bunt attempt against Mabel-Canton in the Section 1A Tournament at Todd Park. Eric Johnson/photodesk@austindailyherald.com

“We knew our defense was key tonight, because we played them before this season and we knew they could hit the ball,” Streightiff said. “We just take it one game at a game like we always say. We’ll just have to keep playing ball. We trust [Hendrickson] a lot and we know she’s going to get the job done.”

Hayfield, which had won its previous three postseason games in four innings, is now one win from its third consecutive trip to the Minnesota Class A state softball tournament. The Vikings will play Wabasha-Kellogg with a trip to the state on the line in Todd Park 5 p.m. Thursday. Hayfield would have to lose twice to the Falcons (15-10 overall) to miss out on state.

“You prepare for it like any other game,” Hayfield head coach Jana Wagner said. “They don’t get too excited about anything. It’s just regular ball. They’re even keeled, and they’re out there having fun.” 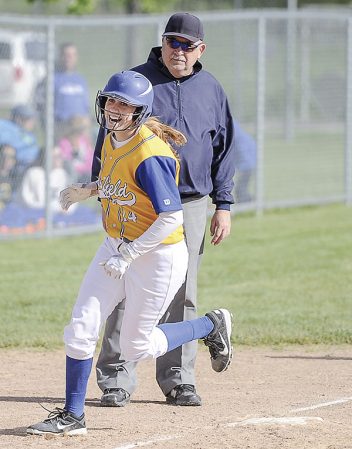 Hayfield’s Kate Kruger rounds third after her two-run homer against Mabel-Canton Tuesday during the Section 1A Tournament at Todd Park. Eric Johnson/photodesk@austindailyherald.com 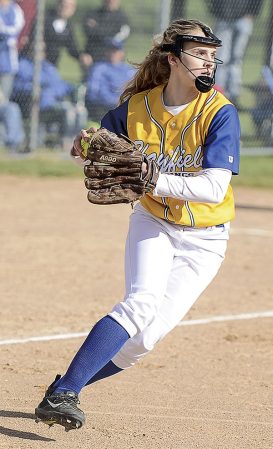 Hayfield third baseman Olivia Matti comes up ready to throw against Mabel-Canton Tuesday in the Section 1A Tournament at Todd Park. Eric Johnson/photodesk@austindailyherald.com