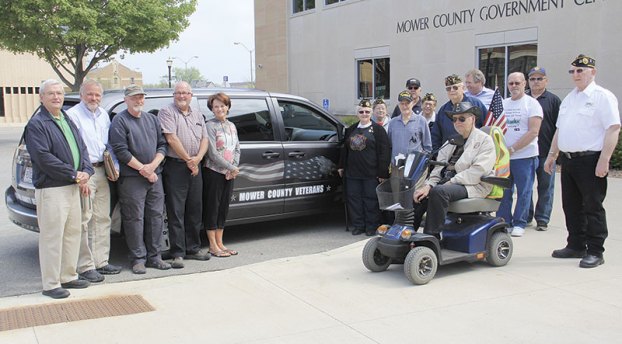 The Mower County Commissioner and veterans pose outside the Mower County Government Center after local veterans groups presented a new van to Mower County on Tuesday. The van will be one of two used to drive veterans to appointments. Jason Schoonover/jason.schoonover@austindailyherald.com

Veterans groups present van to the county; Vehicle to be used for driving vets to appointments

Mower County veterans were on the giving and receiving end of two recent charitable drives earlier this week.

At Tuesday’s county board meeting, local veterans groups presented a 2017 Dodge Grand Caravan to the county.

The van will be one of two vehicles used every even day of the month to drive veterans to appointments at veterans hospitals as far away as St. Paul and St. Cloud.

The county also has a larger van with handicapped accessibility for disabled vets. 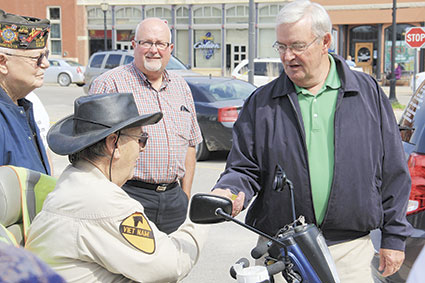 Mower County service groups, Veterans for Veterans Fund and a private family raised money to purchase the van, which the county then staffs and maintains.

“The company’s done an outstanding job really committing to veterans,” said Chris Lea, a supervisor at Hormel and an HMVET member.

Mower County Veterans Services Officer Wayne Madson praised the group for its efforts, telling the board a cash donation from the group recently saved a couple from being evicted.

“Hormel has always had a very active role with veterans in our community,” Madson said.

HMVET has 47 active members and works with the company’s HR team to try and hire veterans. 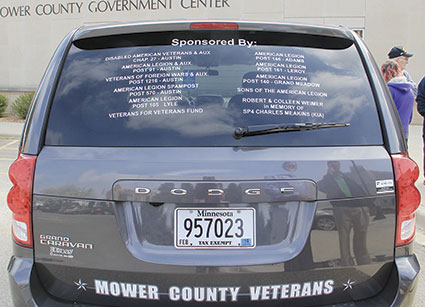 Groups sponsoring the van include:

—Sons of the American Legion

—Robert and Colleen Weimer in memory of Charles Meakins

Treat mom on Mother’s Day to an afternoon of music