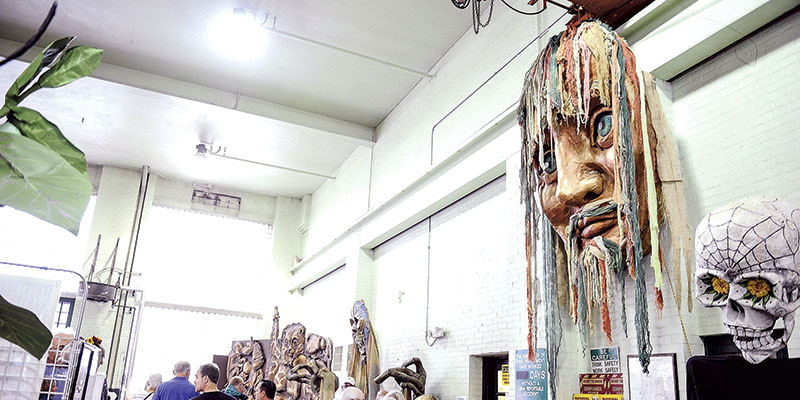 One of Mary Plaster’s larger papier-mache pieces gazes out over the Turbine Room during the first day of the Austin ArtWorks Festival. Herald file photos

The sixth Austin ArtWorks Festival is starting a new chapter.

The festival has been held at the downtown Austin Municipal Plant for five years, but it’s moving to new digs as the Austin YMCA and Vision 2020 move forward on plans to build the Austin Community Recreation Center at the site.

The festival isn’t moving far; it will be held on the green space between the Mower County Jail and Justice Center and Historic Paramount Theatre.

“This is a great opportunity to change it up, refresh, try something new,” Austin Area Commission for the Arts Executive Director Laura Helle said.

“When you have a change like that and something new, there’s an excitement,” she said. “And I think it’s good.”

The committee’s search for a new site was extensive, as organizers analyzed about 20 locations. But they eventually settled on the green space by the jail, which was first utilized for such a public event last year for Hormel Foods Corp.’s 125th anniversary celebration.

Rietz said it was important for the committee to keep the festival downtown to continue supporting merchants.

“Downtown Austin has been with us since the start of the festival, so we really felt we wanted to keep it in the downtown,” Reitz said.

One big benefit is the location. It essentially connects two of the festival’s, and the AACA’s, biggest hubs: the Austin ArtWorks Center and the Historic Paramount Theatre.

On the green space, there will be booths and tents, outdoor stages and more, though organizers are still very much in the planning stages.

The classical music will be performed at the former Austin Park & Rec building beside the Paramount Theatre. That space has been acquired by the Paramount for a planned expansion.

The authors will be at Sweet Reads.

Demonstrating artists will also return, possibly for glassblowing and pottery, but those details are still being finalized.

The Spam Museum is planning a canstruction project, where people will make sculptures out of Hormel Foods products.

The featured artist, Tom Hormel, will be set up just west of the Paramount in the former Austin Parks and Recreation office, which will be acquired soon by the AACA for the Paramount’s planned expansion.

Helle said they’re looking to bring all the key things people expect for the festival to the new space, but they don’t want to bring any vendors that would directly compete with downtown businesses.

Along with the excitement of a new site, Helle admits there’s also a bit of trepidation because problems and surprises are sure to pop up eventually.

Helle also said funding through the state arts board will allow them to do some more outreach to promote the festival.

“It’s really pretty exciting to be able to continue to develop it and round it out,” Helle said.

As in past years, events will be held during the week to lead into the festival weekend; however, specific plans are yet to be announced.

The festival’s annual Saturday show, The Dick Schindler Celebration Concert, will be held on Aug. 26 featuring Artrageous, an interactive music and speed-painting experience.

Helle compared the group to a blend of Cloud Cult, the inaugural concert band, and the Blue Man Group.

She said it’s a bit like a Las Vegas-style show with black lights and other features.

The festival Trunk Show will feature the work of David Schneider.

Helle called the series an amazing partnership with Riverside Concert Series, which receives grant funding to bring these acts in. The shows are free for the public to attend at the Paramount, and Riverside offers shows in Rochester as well.

“It’s a pretty unusual opportunity, and I’m excited that we get to continue to do that, “ Helle said.

Helle described the shows as a good chance for outstate Minnesota residents to witness unique types of music from strong acts without having to drive to the Twin Cities or Rochester and spend $40 on tickets.

“This kind of helps people expand their palate, “ Helle said.  “[It’s] not going to cost anything but their time. “

Each show will be about an hour long.

The Matchbox Children’s Theatre will perform   “No One Will Marry a Princess with a Tree Growing Out of Her Head “ at 7 p.m. on Aug. 18 and 2 p.m. on Aug. 19 and 20 at the Paramount with a week-long Matchbox summer camp leading into the performance.

Each child attending the annual theater camp is guaranteed a role in the show. For more, visit www.matchboxchildrenstheatre.org.

The summer will wrap up with Artrageous during the Austin ArtWorks Festival at 7 p.m. on Aug. 26.

The Austin ArtWorks Center will focus on a new program for families this summer.

The center will host Family Art Studio from 1 to 3 p.m. on the second Saturday of each month starting May 13 and running through Sept. 9.

Families will be able to stop in for the free events and make items out of materials provided. Helle said the families will be free to make what they want, and it won’t simply be a class with a teacher telling participants how to make a certain item.

The Austin Area Foundation is providing funding for the program.

Kids Summer Camp is returning June 27-29 and Aug. 1-4 with details to be announced.

The traveling studio that visited area libraries the last few summers will not return after funding was cut.

—July 19, Delgres, a three-man blues band from the Caribbean blues from New Orleans and the Delta

•Aug. 18-20:  “No One Will Marry a Princess with a Tree Growing Out of Her Head “ by Matchbox Children’s Theatre

This summer at the Austin ArtWorks Center

•Family Art Studio: 1-3 p.m. on May 13, June 10, July 8, Aug. 12 and Sept. 9. Families can drop in and get creative with materials provided in these free events. Children age 12 and under must be accompanied by an adult. Funding by the Austin Area Foundation.

•July 7: Beads, Buttons and Tiles with Layl McDill for ages 8 and up.