The relationships that helped George 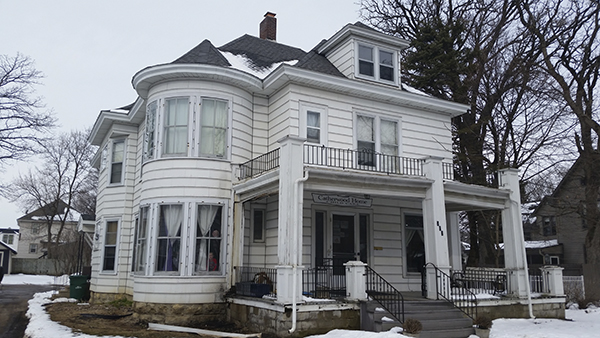 Samuel Doak Catherwood was George Hormel’s best friend and this column is about his home and his history in Austin. George settled in Austin partly due to the relationships he had built with the people in the community, and Samuel was one of those people.

George considered himself indebted to Catherwood for several reasons including “sound legal advice and shrewd business counsel.” He felt that his friendship with the local attorney opened many doors that might not have been available to him otherwise in this community.

If you’ve visited the Hormel Historic Home perhaps you have seen a picture of George and Samuel in their Saturday finest when they were both young bachelors in Austin. Samuel gave up bachelorhood to marry Gertrude Sherwood in 1894 and the couple built their lovely home at 707 Kenwood Drive (now 4th St. NW) in 1900. The Austin Daily Herald reported on March 22, 1900, that “S.D. Catherwood has his house well underway and will have a fine residence.” Several elements still evident in the home include ornate radiators, rich woodwork and stained glass windows. The curved bay window on the front of the home makes for a grand entry that befitted the prominent family.

Catherwood was a graduate of the University of Minnesota and studied law in Cedar Rapids, Iowa. He began practicing law in Austin in 1887 and then joined in partnership with Russell E. Shepherd toward the end of the century.

He was elected County Attorney in 1896. Once, while in litigation against an Albert Lea lawyer, it was noted that Mr. Catherwood proudly boasted of Austin’s Normal College as being newer than the one in Albert Lea and yet having more students. He was reported to be “interested in the progress of the college and everything else that makes a live city.”

Samuel was a member of the Power and Light Board. In 1903 he argued passionately for the need for a water line to be laid on College Street for the health and safety of those living in that area.

Gertrude Catherwood and Lillian Hormel were social acquaintances as well as members of several community groups. They hosted a Birthday Club gathering together in 1905 and they were both members of the Ladies Musical Society. Like Lillian Hormel, Gertrude was well-known for opening her home for enjoyable social events.

The house that the Catherwoods built is now operated as a childcare center by the Parenting Resource Center of Austin. The center has provided a charming, cozy and historic atmosphere to families since 2000. The Catherwood family would surely be pleased to know that their treasured home is being used to serve the community. To find out more about their services visit http://www.familiesandcommunities.org/Catherwood_Child_Care.html.

Presented by Jaimie Timm, Wendy Larson, and Holly Johnson. Residents of Austin’s past built homes and contributed to the economy and culture of the community. Learn about their homes and their lives in this presentation. Homes and families featured will include the other Hormels, the George Burnham home, the Charles F. Fox home and the Fox Hotel. Future presentations will feature homes in the Skinner’s Hill area and homes on historic Kenwood Ave.