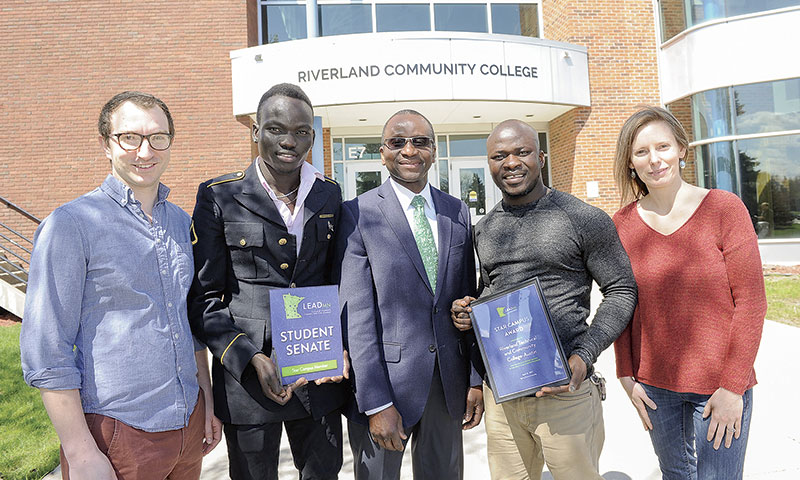 After hearing about the recent successes of the Austin Student Senate and Riverland Community College’s recent designation as a Star Campus on Thursday, college President Dr. Adenuga Atewologun couldn’t hide his excitement.

“I’m so proud of you,” he told student senate members.

The college’s student senate earned the college’s first Star Campus designation, which recognizes the most active campuses in Minnesota State College Student Association for going above and beyond.

To achieve Star Campus status, the Austin Student Senate had to meet 10 of 12 requirements, and Adviser Keith Cich noted the requirements aren’t something a senate can do all at once; they must be active and steady throughout the school year.

“It shows a senate that’s very consistent, very passionate about what they’re doing,” said Cich, who has been the adviser since October.

The Austin Student Senate has been active in many ways this school year.

Student senate leaders helped bring a lactation room to Riverland, and they promoted a get out the vote campaign last year to ensure students’ voices were heard during the 2016 election.

They traveled to Washington, D.C., and to the Minnesota State Capitol to advocate for a 1 percent tuition decrease, but a bill is proposed to increase tuition 3 to 5 percent.

“We want a lot of people to get back to school,” Austin Student Senate President Adama Youhn said. “And when tuition is high, it means we may likely have a low enrollment.”

Youhn argued a tuition decrease would make it possible for more students to attend college, which will then boost the workforce.

The Austin Student Senate called for tuition relief by traveling to the Minnesota Capitol and by meeting with Rep. Jeanne Poppe and state Sen. Dan Sparks, both DFL-Austin. Senate member Becky White told them her own story of going back to school as a married mother.

“We were able to tell them our stories of why we’re going back to school and how important it is that tuition stay low for us,” she said. “And that was really a great day.”

Austin Student Senate Public Relations Coordinator Oballa Oballa called education vital to the state and the community’s livelihood. He called education an important tool to keep students in the workforce here in Austin and in Minnesota, rather than seeking work elsewhere.

The senate started the school year with about 19 members, but some students dropped off after transferring or experiencing scheduling conflicts. While a group of about seven are active now, Youhn thanked all who’ve participated throughout the year.

“Because it mainly effects them,” she said. “And what we do here is for us and future students.”

The student senate, they say, is not about politics; it’s about learning the traits of leadership and working together to accomplish goals. Youhn spoke of the importance of students learning leadership skills and being a voice for all students.

Youhn praised the college and administration for supporting the Austin Student Senate and allowing them to be active in the community. He noted the goal is to represent the positive image of Riverland “because we see ourselves of ambassadors of Riverland.”

Atewologun praised this year’s student senate for gaining leadership skills and leaving a legacy for current and future students to aspire to.

“It’s like you’re setting the standard high, and others have to try to catch up to you,” he said.

Atewologun joked that Youhn has done his job this year, and it’ll be up to Oballa, next year’s president, to take the reins and keep the momentum going.

But Oballa was excited and ready for the challenge on Thursday, when he said he plans to maintain the momentum and lead a senate that’s a voice for RCC’s students, both at the school and in the community.

Oballa said an active student senate can serve as a magnet for the school, as he said the Star Campus recognition gets Austin recognized across the state.

Senate leaders already have big plans for the future. They’re working to get a larger monitor to be placed near the main entrance of Riverland’s east campus in Austin to inform students about weekly and upcoming events.

White has also worked to start a food pantry at the school next year, completing much of the groundwork even though she’ll have graduated by the time it debuts next year.

The plans is to help students who may be facing food insecurity.

“Hopefully next fall we’ll have a food pantry for … college students on campus, which will be trying to help students that are experiencing food insecurity,” White said.

“What’s kind of an inspiring thing is what I’m hearing from the senate is: OK, we got this and this is really exciting this year, but this is going to be kind of a standard thing; we’re going to get this every year because we’re going to see a very active senate moving forward.”