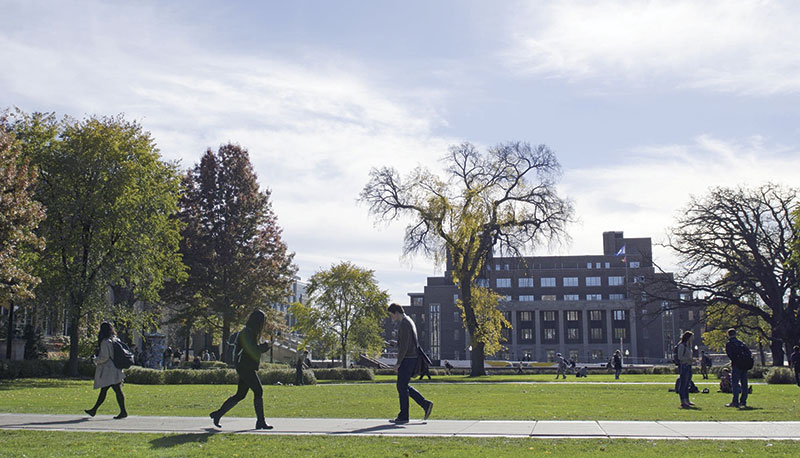 People walk across the University of Minnesota green. Sam Harper for MPR News

ST. PAUL — Tuition is likely to rise for students attending most public universities in Minnesota.

The Minnesota Legislature’s budget increases total spending by $210 million over the last two-year budget, but the overall amount is much lower than what higher education leaders wanted.

“We will be looking at some programmatic cuts and/or very modest tuition increases as we go forward,” he said. “Overall it’s an outcome for us that’s positive, but not quite what we needed.”

If the U does choose to raise tuition, that’s on school leaders, said Sen. Michelle Fischbach, R-Paynesville.

Sen. Jason Isaacson, DFL-Shoreview, is also an instructor at Century College. He said the legislature has given the U little choice.

“What other choice do they have besides raising tuition when you cut their funding?” he asked during floor debate on Sunday.

The Legislature can determine tuition for Minnesota State schools.

This year’s funding bill freezes tuition in the 2018-2019 academic year at all 37 Minnesota State colleges and universities. But for the upcoming 2017-2018 year, the bill caps increases at 1 percent for two-year schools. It has no tuition limits for Minnesota State’s four-year universities for the 2017-2018 school year.

“My prediction will be that tuition will probably go up 3 percent in the first year,” he said. “But I am glad it will be frozen at that number the second year, so that’s a small glimmer of hope within this budget.”

A spokesperson for Minnesota State said in an email, “The presidents and their campus communities will discuss potential tuition increases and make recommendations to the chancellor. Any tuition increase would need to be approved by the Board of Trustees.”

“It’s a pretty good bill, [but] with this size of a surplus we could’ve done better I believe,” Pogemiller said. “Individual provisions in the bill are pretty good, and the investments are solid.”

Pogemiller hoped for more money for the grant program that helps students from households making less than $80,000 a year. The program will have $36 million in new money.

To slow the growth of student fees at schools, a policy provision requires students vote in favor of any fee increase of more than 2 percent.

The bill includes $350,000 to help students struggling to pay rent or find food.

Both the Legislature and governor supported a way to address sexual assaults on campuses, Pogemiller said.

“We’re going to hire someone at the state level to help particularly smaller campuses implement best practices for dealing with sexual assault on campus,” he said.

Pogemiller said smaller schools generally have Title IX coordinators who have to balance that job with other duties.