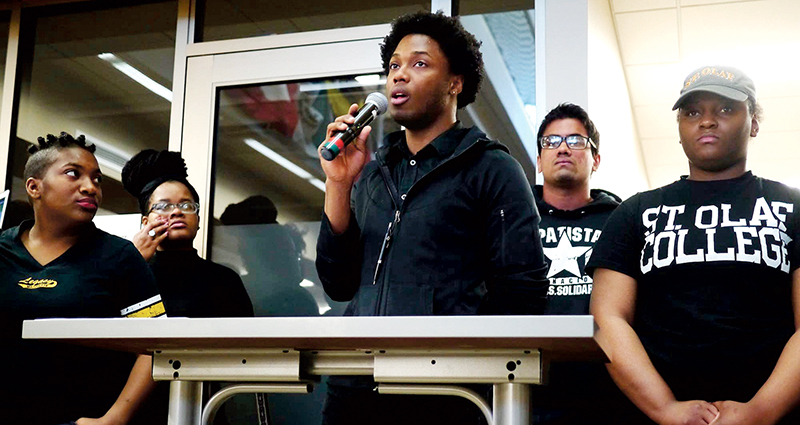 St. Olaf College junior Don Williams, a Chicago native, addressed student supporters on May 1 inside the packed atrium of a building on the school's Northfield, Minn., campus. Doualy Xaykaothao/MPR News

A week after the revelation that a recent highly publicized racist incident was a hoax, a student-led group at St. Olaf College has released a 74-page report on racism dating back to the founding of the school.

A note left on campus that used the N-word was an admitted fabrication, according to school officials. But that was only one of nine alleged racist incidents that occurred this academic year.

“I am not a part of a safe community, for my identity as a black person,” said student Don Williams. “I am not safe here. Me, personally. They have done zero to ensure my safety.”

Williams, 21, wants to be a professional dancer. He has a year to go before graduation, and is pursuing a double major in dance and women’s and gender studies. He’s been unable to focus on his exams.

Last month, Williams returned home after walking his dog one evening and found a message on his car with the N-word on it.

“That N-word has so much history, so much baggage … when I got that [letter], history kept rushing, like I was reliving it, reliving the time where if a black person just looked at a white person, you might get hanged,” he said. “If a black person doesn’t follow ‘master’ you get whipped, you might die. My blackness, that identity tells a story, it has history behind it.”

The Chicago native didn’t know what to do. But he began to feel that he couldn’t be the only person to go through this.

“I thought, OK, we need as a community … to come together, and talk about this, like now,” he said. With the help of other St. Olaf students, he co-founded a group called The Collective for Change on The Hill.

After sharing personal stories of racist incidents, the collective inspired enough supporters to fill an administrative building, and prompted officials to cancel classes for the first time in three decades.

Hours later, after intense negotiations with student leaders, the college president signed an agreement to create a task force on inclusion and diversity. Students of color saw the moment as an historic achievement in the history of St. Olaf.

But then the college president, David Anderson, announced that one of the racist incidents had been fabricated. In a statement, he said a suspect had confessed to writing the threatening note to “draw attention to concerns about the campus climate.” The school said it continues to investigate other racist incidents.

Junior Krysta Wetzel, a member of the collective, worried the hoax letter would diminish the movement.

She thought, “Oh man … this could hurt, not just hurt individuals, but this movement as a whole. But … this one incident was not the reason why we are doing this. The environment of this college should not be one that normalizes these kinds of [racist] incidents. When we speak of these kinds of things, other people have also experienced these things, multiple years in a row.”

Seniors Iris Brenner and Will Harens, both white, said they support the collective and have deep empathy for nonwhite students.

“I felt really proud of the student body … for being so impressively together with all the organizing they’ve done,” said Brenner. “I’ve done volunteering work, and it’s never even close to what they pulled together in a short amount of time. And I think I’ll look back on it, and be glad that I was here to see it, because I think it is a watershed moment.”

Harens said the episode was “eye-opening.”

“Because we would get emails or hear from people that the N-word was written on a white board,” he said. “And it can be easy to kind of disassociate that until someone steps up, and you hear their voice, and you see their face, and they say, ‘This happened to me’ … that personal connection with it is really important. And I think it was a wake-up call for a lot of people on campus. It certainly was for me.”

Sophomore Kathryn Hinderaker, who describes herself as a conservative, said she supports the student protesters but disagrees with some of their objectives.

“It doesn’t help to just say, oh there’s systematic racism, and to just keep using this word when no one understands what it means, or what the effect of that is, or how we can fix it,” she said. “So I think what is effective is taking these incidents of racism and proposing a solution.

“One of their demands is they want some of the curriculum changed … and I think that’s a great response to some of the things that have happened. But at the same time they’re using it to push through some of their political agenda.”

Anton Armstrong, conductor of the St. Olaf Choir, posed a simple question and answer: “Is this campus a racist campus? No.”

Armstrong, who is African-American, has taught at the school for nearly three decades. He was a student at St. Olaf back in the early 1970s.

“In this area, St. Olaf has done many wonderful things,” he said. “At times, it feels like anytime something goes wrong, we’re kind of put up there in the spotlight, and kind of hung out there to dry. We’re not dealing with anything that many other schools … are not facing. It just happened to blow up right now.”