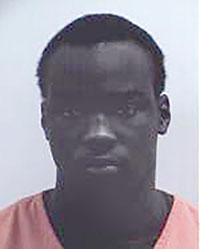 Phabayo Nygare Gilo, 19 — who was recently sentenced to five years in prison in other cases — was also identified as being involved in the incident but wasn’t charged.

Police were able to piece together details of the incident from talks with the victim and witnesses, along with surveillance videos. The victim and another man met Omot and Gilo outside unit one of Western Manor to buy marijuana, but Gilo and Omot tried to get the victim’s money. He had $1,809 in his wallet, police found during the investigation.

During the altercation, Gilo allegedly told Omot to shoot the victim. Two shots were fired, one hitting the victim in the left leg. The other man with the victim then drove him to the hospital.

Police arrived on scene shorty after but were unable to find either suspect.

A 9 mm shell casing was found that day, and a second was found a few days later by a Western Manor resident and turned over to police.

One witness told police that Gilo told him Omot had shot someone, and he said that Omot owned a 9mm pistol, which he’d previously pulled on another person. He suspected Gilo and Omot wanted to rob the victim “because that’s what they do.”

The victim was able to pick Omot out of a photo array but not Gilo. However, police matched prints from Gilo’s shoes, taken while he was in jail on another case, to prints found at the scene.

On March 22, Omot was arrested on the 300 block of Second Avenue Southwest. Omot initially refused to provide any identification to police, and instead stated the name of an Austin police officer. But officers were able to confirm his identity.

Omot is due in court for a June 2 pretrial and June 12 trial.