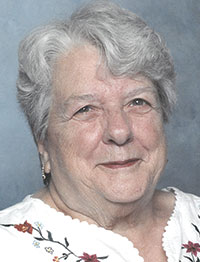 Ruth Cora Cohenour, 86, of Brownsdale, Minnesota, died Friday evening, May 26, 2017, at Prairie Manor Nursing Home in Blooming Prairie, Minnesota, with her family by her side.

She was born July 11, 1930, in St. Paul, Minnesota, the daughter of Clarence and Henrietta (Rick) Bain. After completing her education, Ruth was a housekeeper at various resorts in Minnesota for many years. She made her home in St. Paul until moving to Brownsdale in 1990. She enjoyed working on puzzles, doing knitting and walking.

Ruth is survived by seven children, Mae (Don) Heimer of Pequot Lakes, Minnesota, Harold Cohenour of Owatonna, Minnesota, Richard Cohenour of Brownsdale, Shirley Maier of Pequot Lakes, Anna (Bill) Hicks of Austin, Minnesota, Robert (Angela) Cohenour of Brownsdale and Tina Kirk of Austin; 18 grandchildren; 24 great-grandchildren; four great-great-grandchildren and many other relatives and friends. She was preceded in death by her parents, brothers and sisters. A private family memorial service will take place at a later date. Condolences may be expressed to the family online atwww.worlein.com.