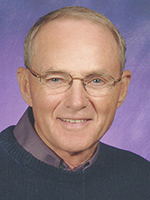 Robert was born on Sept. 16, 1938, in Northwood, Iowa, to Harold and Eleanor (Tue) Low. He graduated from Carpenter (Iowa) High School in 1957. On June 2, 1962, he married Diane Ankeny at Grace Lutheran Church in Austin, Minnesota.

He went on many fishing trips to Canada and also enjoyed deer hunting, wood working and sports. He was the owner of Ankeny Mini Mart #1 and #4 from 1984 to 2000. They wintered for 15 years in Florida.

Robert was an active member of Bethlehem Free Methodist Church until his health limited him. He loved children, especially babies.

He was preceded in death by his parents, Harold and Eleanor Low; his brother, Charles Low; his in-laws, Stanley and Miriam Ankeny; and son-in-law, Mark Heim.

A celebration of life will be held at 11 a.m. on Saturday, May 13, at Bethlehem Free Methodist Church with Pastor Paul Steele officiating. Interment will be at Grandview Cemetery. Visitation will be at the church on Saturday from 10 a.m. until the time of the service.