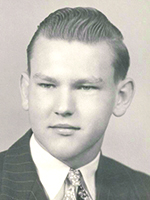 He was born in Austin, Minnesota, on June 25, 1932, to William J. and Cora Frances (Champlin) Lamp. At age 12 his family moved to Grand Meadow, Minnesota, where they ran a grocery store and meat locker.

He graduated from Grand Meadow High School in 1951, attended Gale Institute in Minneapolis and became a depot agent for The Milwaukee Road in a number of cities, including Albert Lea, Minnesota, where he met Jeanne Champine. They were married Jan. 1, 1954, and lived for a time in Vienna, South Dakota, but returned to Grand Meadow, where he was depot agent and also held the part-time position of village clerk. It was in that capacity that he oversaw the building of the city-owned Meadow Manor Nursing Home, which opened in 1964. The Village Council asked him to run the facility “until they found someone suitable,” so he took a six-month leave of absence from the railroad. After six months, he was asked to take the job permanently and did so, running one of the most highly regarded facilities in the state for 28 years, then served as a consultant for six months before final retirement.

He was extremely active in the Minnesota State Association of Health Care Facilities and was on the board up through 2nd vice president. When asked to become president he felt unable to do so because of the time commitment involved. Whereas facilities of similar size usually had an administrator, a secretary, a treasurer, and sometimes an additional staff person, he handled all those duties himself.

He was an avid outdoorsman, known for successfully hunting deer, bear, antelope and many types of small game with both gun and bow and arrow. He traveled to Ignace, Ontario, for 50 years to fish, first with a group of friends and later with two of his sons. He also made three trips to Alaska to fish, during one of which he caught a 119 pound halibut.

He also excelled at trap and skeet shooting, winning many events and holding the Cedar Valley Conservation Club traveling trophy for skeet for nine straight years. He was elected to the Minnesota All-State Skeet Team in 1985 and 1986.

He was preceded in death by two brothers, William III and Gaylan.

There will be no service at this time. In accordance with his wishes a private celebration of life will be held at a later date.

Hindt Funeral Home is in charge of arrangements. Condolences may be left at www.Hindtfuneralhomes.com.