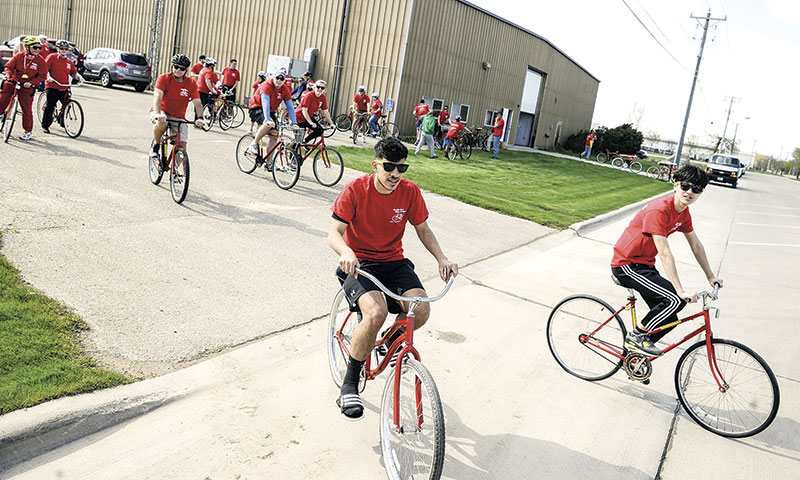 Vicki Osier and Sue Mullenbach sat on two red bikes Thursday afternoon, eager for the signal to ride them out to one of nine racks around town.

“I’m on the environmental committee for Hormel [Foods Corp.] and we help with the red bike program,” Osier said. “I think this is good for the community.”

“I was born and raised here and I like to support anything that is positive for the community,” Mullenbach said.

Austin’s Red Bike program officially began its second season on Thursday with volunteers riding the bikes to their respective racks.

About 40 riders rode away from a city storage building in northeast Austin on Thursday afternoon. The sun shined down as the volunteers raced in all directions, the beautiful weather perfectly capturing the mood at the roll out.

“Today is the big day,” Vision 2020 Walking and Biking Committee Chairman Steve Kime said. “Getting these bikes out for people to use has been the goal.”

The rollout was originally scheduled for Monday, but it was postponed due to weather.

Mayor Tom Stiehm and members of the Austin Police Department also got involved with the ride.

“Our department thinks it’s a great thing for the community,” Austin Police Capt. Dave McKichan said. “We’re able to help them out with some of the bikes that we recover. I thought it was important to come out and recognize the volunteers that put a lot of work into it.”

According to Kime, volunteers spent over 200 hours cleaning and painting donated bikes in preparation for this year’s program. 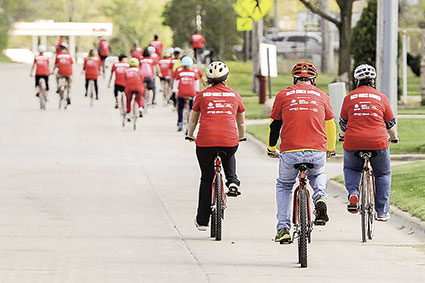 “Volunteers were key to the success,” he said. “The community response was tremendous.”

The Vision 2020 Walking and Biking Committee is hoping to expand the program to 60 bikes this year, up from 30 bikes last year. Kime said that some of the bikes will be smaller, kid-size bikes.

Red Bikes will be available all summer at various locations throughout the city. Residents and visitors are encouraged to borrow bikes to explore Austin. Red bikes can be borrowed free of charge.

•Follow the rules of the road and ride at your own risk.

•Helmets are not provided, but are strongly encouraged.

•Riding a red bike after dark is not allowed.

•Please return the red bike to any red rack.

•Inspect the bike before riding it and do not ride a bike in need of repair.

•If a red bike needs repair or is found somewhere other than a red rack, please contact Parks and Recreation at 507-433-1881.

For more information, or to find a red bike rack near you, visit http://www.ci.austin.mn.us/park-recreation/red-bike-project.