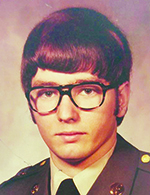 Raymond “Ray” Allen Smith, 62, of Nevada, Iowa, passed away Thursday, April 20, 2017, at State Center Specialty Care in State Center, Iowa. Linda, his wife of 42 years, was holding his hand and his children, Nikki, Aaron and Mitchell, were by his side.

Ray was born June 3, 1954, in Austin, Minnesota, the son of Allen L. and Marvel J. (Kolb) Smith. He graduated from Wabasha High School in 1973, and was united in marriage to Linda Cochlin on Oct. 18, 1975, in Geneva, Minnesota. In 1973, Ray enlisted in the U.S. Army. During his 32 years of service, he was a maintenance supervisor and earned the rank of Master Sergeant. Ray’s last assignment was with the 394th Corps Battalion in Ames, Iowa, from which he retired in 2005. He then worked for Almaco in Nevada as a purchasing agent and Lowe’s in Ames in the tool department. He enjoyed woodworking, fishing, working on cars and trying new restaurants with this family. He retired in 2016.

The family would be honored to receive memories and photos from family and friends. If you would like information on directions or local accommodations please message either Jan or April.