More than trees and power lines were damaged by last week’s thunderstorms and high winds.

The Raptor Center at the University of Minnesota was contacted by a Rose Creek-area farmer who was worried about two bald eagle chicks who had fallen about 50 feet after the nest was blown from the top of an oak tree during the storm on the evening of Wednesday, May 17. 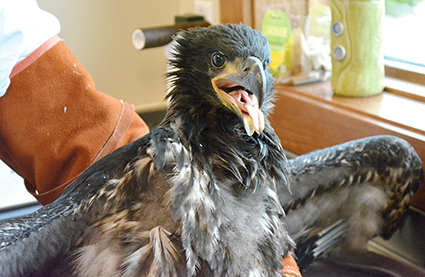 Champlin, a veteran bird rescuer, and naturalist intern Savanna Dahl wasted no time in hurrying to the scene, arriving at the tree with the help from the farmer late Thursday afternoon.

The eaglets, about 8 weeks old, had fallen, along with a portion of the nest, from the top of the 50-foot tree. Fortunately, a portion of the nest fell onto a branch about 15 feet below where the nest was made, which probably broke at least a part of the momentum of the fall. The birds fell the rest of the distance. Although referred to as “chicks,” the birds each weigh between 5 and 6 pounds.

It was clear that one of the pair was injured, Champlin said.

“The birds were just sitting on the sticks of the [fallen] nest,” Champlin said. “They were scared.”

But, they were alive and that was the best news, Champlin said. She had been on too many rescues where birds were too badly injured to recover. 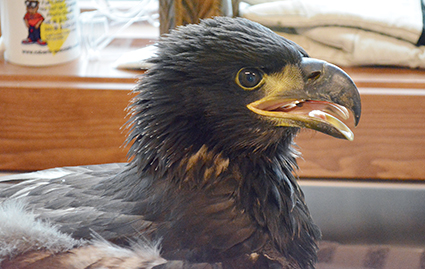 Champlin said although the eaglets were young, they could unwittingly injure a rescuer. Outfitted with gloves and small animal carrier crates, the pair worked to control the talons first, cover their heads to calm them, and then placed the eaglets into the crates. Champlin felt her suspicions were right that one of the chicks was injured as she carried the raptor to a carrier. The other eaglet appeared uninjured.

Dr. Anna Kathleen MacAuley, a veterinarian from the Raptor Center, was on the phone with the pair during the rescue.

Champlin and Dahl kept MacAuley informed about what they were witnessing. As they carried the raptors from the property, they noticed “the parents flying overhead,” said Dahl. She wondered if the eagles refrained from “dive-bombing” the women since the adult raptors often saw the farmer, who was with the women during the rescue, and considered him non-threatening.

Once back at the nature center, the pair did a quick inspection, checking the eaglets’ eyes and wings, and then hydrated the birds before putting them in a dark, quiet room to rest. 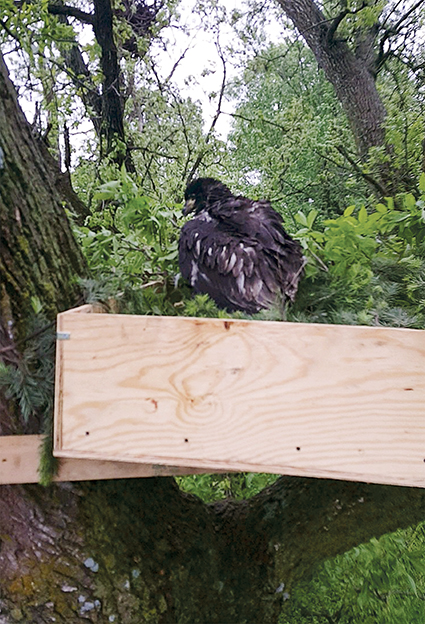 The new nesting platform, built by the Raptor Center and local farmer, was quickly installed to provide a new space for the bald eagle chick and its parents.
Photo courtesy of Julie Champlin

Duane Champlin, Julie’s husband and a fellow veteran bird rescuer, transported the eaglets to a volunteer from the Raptor Center, meeting in Faribault. In the meantime, a center volunteer and the farmer built a platform upon which the eagles can nest again.

Raptor Center Director Julie Ponder said the other chick suffered a fractured pelvis and hopes are high to reintroduce the eaglet back to the nest with its family.

“The best thing is bed rest and to be fed by mom, and the best place for that is in the nest,” she said.

Ponder added that this story was a common one in the spring, when chicks are born, and the weather is turbulent.

It is also a success story, said Champlin.

She has rescued scores of birds — many owls and hawks — over the years and is always saddened when knowing most of the missions will end with euthanization. By the time staff is contacted, at times, the birds are too sick, or whose injuries are too severe, to save. Some rescues have been aided in recent years with the ability to quickly find the locations, due to GPS and cell phones, whereas in the past, Champlin said, “You’d get a call, ‘Take a right at Casey’s, go three miles,’ that kind of thing. We are getting to the locations much more quickly these days.”

And, sometimes, with life-saving results, she said.

“I was so glad that this one had a happy ending,” Champlin said.

The experience for Dahl was one of a kind, she said.

“To have that chance to see those majestic birds close up was mind-blowing,” Dahl said. 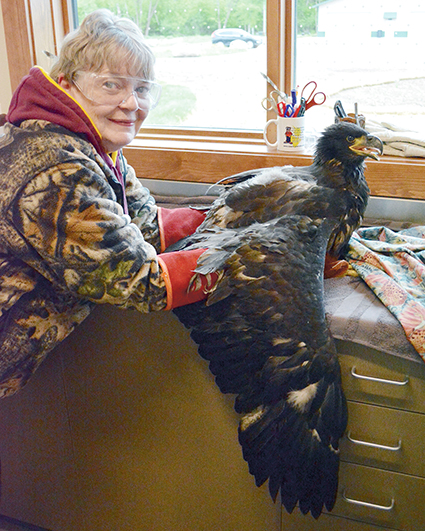