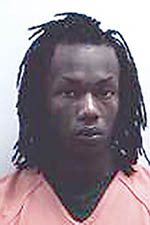 A 19-year-old man involved in multiple court cases is headed to prison.

Phabayo Nygare Gilo was sentenced in Mower County District County last week to serve five years in prison with credit for 327 days served for being a violent felon in possession of a firearm, a felony, after agreeing to a plea agreement in March.

He was also sentenced to a concurrent sentence of 13 months in prison for felony fifth-degree drug possession from a Jan. 8 incident, and he was sentenced to 90 days in jail with credit for 90 days served in another case for misdemeanor DWI in September 2016.

In the firearm case, he was involved in a dispute over a woman that sparked an altercation and led to someone firing gunshots into the air early Feb. 3, 2016.

According to court records, officers responded to the 800 block of 11th Street Northeast shortly after 12 a.m. for a report of an altercation with a firearm.

A male and female told police Phabayo and another man, Semaj Maurice Dow Jr., had arrived in a 2011 Honda Accord. The accord had pulled up to a house, pulled the man from the residence and Dow asked him “Why you with my girl?” before allegedly punching the male victim, according to the woman.

The parties exchanged words and as the car drove away, the female victim heard gun shots and saw a muzzle flash which she described as “sparks,” though she said the gun was fired into the air and not at a residence, according to the complaint.

Officers found the man who’d been punched who declined medical attention and refused to have his injuries photographed, and officers later found he had an aggravated robbery warrant from Illinois and arrested him.

Officers located the suspect vehicle and took four suspects were taken into custody, including Phabayo and Dow, who both gave officers false names.

Officers cleared the Honda and found a handgun under the car. The .22-caliber revolver was directly under the rear passenger side door, and had six empty shell casings with no live rounds. Officers also found a recently discarded dark glove on a snow pile near the area.

Upon reviewing the squad video surveillance, officers saw Phabayo exit the passenger side rear door of the Honda and officers saw he had a dark glove on his right hand for a short time, before putting both hands behind his back and throwing the glove in the snow, then getting to the ground. The three other people then exited and got to the ground.

For the Jan. 8 incident, Phabayo and his brother, Gumdel Nygare Gilo, were apprehended by police at El Maguey bar while under age. Gumdel was arrested without incident, but Phabayo fled before falling on ice, causing officers to fall too.

Phabayo also faces felony third-degree assault and a gross misdemeanor for assault in the fifth-degree for committing a crime within three years of a prior conviction. Those charges stem from a Sept. 1, 2016, incident where allegedly assaulted a woman at Mandolin Apartments.

Phabayo was also implicated in court records as being present during a Jan. 27 shooting involving drugs, but he hasn’t been charged in that incident.