Packers salvage a split against Raiders 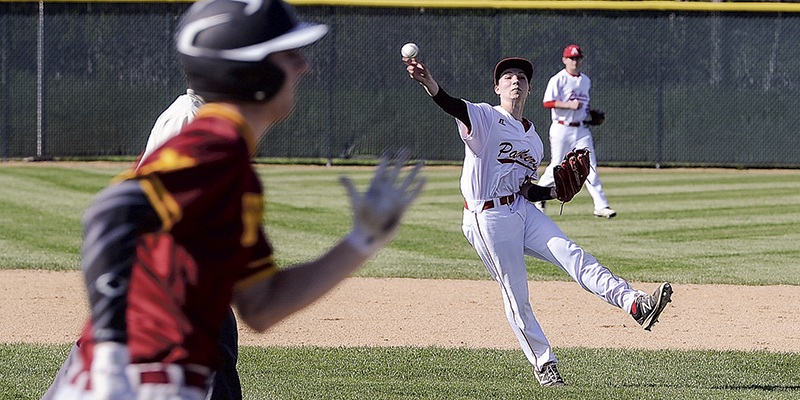 The Austin baseball team struggled out of the gates, but it was able to rally and pick up a split against Northfield in a doubleheader in Dick Seltz Field Friday. The Packers dropped the opener 12-3 and they won the nightcap 7-5.

Austin was able to use its defense to turn the tide in the second game. The Packers were clinging to a 6-5 lead when Northfield loaded the bases with two outs in the bottom of the sixth. Austin second baseman Riley Wempner ended the threat when he made a diving grab to snare a line drive off the bat of Norfhfield’s Daniel Glampe.

“It was a drop step, dive and pray,” Wempner said. “It went in my glove and I didn’t break my sunglasses. It was all good.”

The Raiders had runners at the corners with two outs in the seventh and Austin reliever Michael O’Connor was able to get a strikeout to end the game. O’Connor pitched three scoreless innings and he struck out five.

“I had a few nerves going on,” O’Connor said. “When I got to the last inning I was pumped up and I knew I had a good defense behind me. I had confidence after that play that Riley made. That was a huge boost.”

Josi Bothun picked up the win in the nightcap for the Packers (6-5 overall, 3-2 Big Nine) and Evan Horstmann had a pair of RBIs.

“Josi did a great job,” Austin head coach Joe Kroc said. “Pitching and defense has been our strength this season and today we struggled on defense and left some plays out there. Pitching wise we missed some spots. But in game two Riley made that great play and Michael came in and pitched three shutout reasons. It says a lot about them after getting pounded in the first game.”

Northfield’s Hunter Keep had a big impact in the first game, when he doubled tripled and homered, but in the second game, the Packers were content to intentionally walk him multiple times. 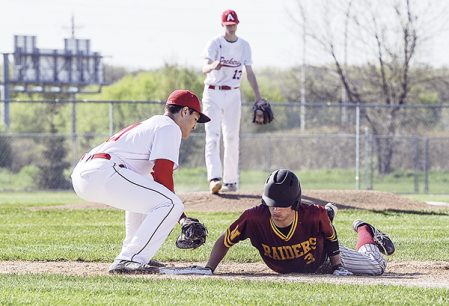 Austin first baseman Phillip Zynda puts down a tag after Northfield’s Ross Beumer dives back into first on a pick-off attempt in the first inning at Dick Seltz Field Friday. Eric Johnson/photodesk@austindailyherald.com

“He’s a great player,” Kroc said. “In the first game we didn’t have situations where we could put him on and in the second game we did.”

The Packers came out and scored two runs in the bottom of the first of the nightcap to get going early and Wempner said the team was motivated to make a statement after dropping game one.

“It’s always a grind versus Northfield, because we’re always rivals with them,” Wempner said. “Coming back after the first game and showing we can compete with them in the second game was big.”