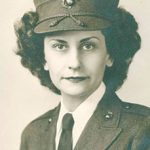 To attend high school, Ora left the Machacek farm for Austin, where she worked as a housekeeper and babysitter for Austin families in exchange for room and board.

Following graduation from Austin’s Central High School in 1937, Ora began work at George A. Hormel Company as a clerk-typist in the administrative offices. Her initial pay rate was 46-1/2 cents per hour — “Good money in those days,” she recalled.

With the country engaged in World War II, Ora raised her hand and joined the U.S. Marine Corps, training at Hunter College and Indiana University.  She served her country for two and a half years, assigned to Marine Corps Air Station, Cherry Point, North Carolina. When Sgt. Machacek came marching home in 1945, she went right back to Hormel, where she worked for almost four decades.

In 1947, she married Elmer James Yaroshek, a fellow Marine and Hormel employee who had fought in the Pacific during the war.

Ora was a very patriotic woman who was proud of her military service. She loved U.S. Marine Corps memorabilia, and many of her snappy vests and blouses carried the red, white and blue of the U.S. flag. In 2002, she was among the World War II veterans and Hormel retirees who were honored at the Spam Museum in Austin, Minnesota, with a memorial wall into which their names were etched. Journalist Tom Brokaw spoke at the dedication, hailing the honorees as members of “The Greatest Generation.”

Ora was also proud of her Czech heritage and of the sacrifices endured by her ancestors to make a new home in America. Her father, Lewis Machacek, came to the United States as a child with his family from Bohemia (Czech Republic). His father, Frank Machacek, and mother, Katherine Vyborney Machacek, left Kutna Hora, east of Prague, in 1864, with their 10 children ranging in age from 1 to 16 and somehow made their way to the Port of Bremen, where they boarded the S.S. America for a voyage of several weeks, during which one infant died and was buried at sea. When they landed in lower Manhattan, New York, in the area now known as The Battery, street riots were rampant and the Civil War was tearing the nation apart. Yet the Machaceks made their way to Lyle Township, Mower County, Minnesota, to begin their new life. Ora grew up in a community of families with similar stories of hardship, promise, success and pride.

She was the last of the 39 grandchildren of the original family of Frank and Katherine Machacek to migrate. Ora is survived by four nieces, nine nephews and many great- and great-great nieces and nephews.

A memorial service will be held at 10 a.m., Saturday, May 27, 2017, at Worlein Funeral Home Chapel with Pastor Dennis Tamke officiating. Visitation will be held from 9 to 10 a.m. on Saturday, May 27, at the Worlein Funeral Home. Burial with military honors by Star of the North Marine Detachment, American Legion Post 91 and VFW Post 1216 will follow at Oakwood Cemetery next to her husband of 54 years, Elmer Yaroshek.