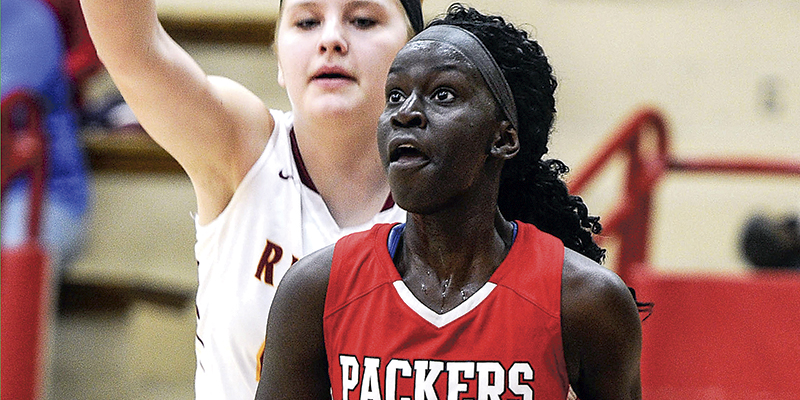 Austin’s Rebecca Younis looks to shoot in the first half against Northfield in Ove Berven Gym this year. Herald file photo

Austin senior Rebecca Younis has always had her sights set on playing college basketball. Now she’s ready to make that dream a reality.

Younis recently made her commitment to play basketball at NJCAA Division I Pratt Community College under an athletic scholarship.

PCC is located in Pratt, Kansas and is approximately 640 miles south of Austin. Younis moved to Austin from Houston, Texas when she was an eighth-grader and she also has family in Kansas City, so she’s not to fazed about making the long move.

“I kind of wanted to get out of the area and start new in a fresh environment,” Younis said. “I’m really excited, playing college basketball has been my goal since I was a little kid. A lot of my older cousins went on to play and I’ve always wanted to be one of the first girls in our family to play basketball after high school.”

Younis is a cousin of Peter Jok, who averaged 19.9 points and 5.5 rebounds for the University of Iowa this past season. She now wants to take her game to the next level as she is projected to play shooting guard at the next level.

“I want to be a leader. The team is really young and I feel like I can bring a lot of energy to them,” Younis said. “I’m going to have to lift a lot to get bigger because they play in a really tough conference.”

The Beavers went 8-23 overall last season and the school recently brought in John Ishee to coach the team.

Younis, who also garnered interest from DMACC, Iowa Central and Kirkwood, was considering going to Pratt before Ishee was hired and she’s also been in contact with him since he was brought in.

“I’ve been talking to him and he has a lot of experience coaching,” Younis said of Ishee. “He told me that he feels he can get me better and get me out of a JuCo in one year. I like that he said that and that he has faith in me.”

Younis averaged 6.2 points, 3.3 rebounds, 3.3 assists and 2.7 steals for the Packers this past season. She hopes the best for the program as she moves on to the next level.

“It’s been great playing in Austin and I know they have a great future,” Younis said.