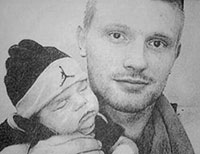 He was born Jan. 18, 1989, in Robbinsdale, Minnesota, to Thomas and Linda (Heineke) Stotlar. Michael attended high school in Minneapolis and worked at Sears and Fresh Blast, Inc., both in the Twin Cities. He moved to Austin in October 2013 and worked at Bellisio Foods and Quality Pork Processers. Michael was a music lover, especially ­­­­­­­­­­country music. He also enjoyed fishing, following sports, and practicing on the gun range. A devoted father, Michael loved his family and treasured the time spent with his sons.

Funeral services will be held at 1 p.m. on Thursday, May 11, 2017, at the Worlein Funeral Home Chapel in Austin. The Stotlar family will greet friends for one hour prior to the service at the funeral home.

Memorials may be directed to Michael’s family, or a recipient of donor’s choice.