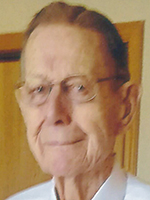 Mervin was born April 9, 1925, in Racine Township, Minnesota, to Halvor and Ida (Temanson) Hanson. He graduated from Grand Meadow High School and served in the U.S. Navy during World War II. He married Myrtle Smith on Nov. 23, 1944, in Rochester, Minnesota. After working for 42 years, Mervin retired in 1986 from the George A. Hormel and Company and went on to work as a part-time clerk at the Hy-Vee Food Store.

He was a member of Holy Cross Lutheran Church, Olaf B. Damm Post, 91 1216 Veterans of Foreign Wars, and a former member of the local P-9. He received the American Legion School award in 1943.

Funeral services will be held at 11 a.m. on Thursday, June 1, at Holy Cross Lutheran Church with the Rev. Larry LaDassor officiating. Interment will be at Bear Creek Cemetery in Grand Meadow, Minnesota, with Olaf B. Damm Post 1216 VFW and Austin Post 91 American Legion in charge of military rites. Visitation will be at the church one hour before the service on Thursday.

Memorials are preferred to the donor’s choice. Clasen-Jordan Mortuary is in charge of arrangements.