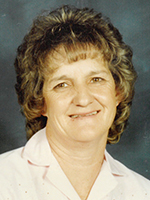 Mathilda “Tillie” Minto, 78, of Austin, Minnesota, passed away peacefully at her home on Tuesday, May 2, 2017.

Mathilda Hensena Pfiefer was born on Nov. 8, 1938, to Frank E. and Malvina (Madson) Pfiefer in Blooming Prairie. She attended Blooming Prairie schools. On May 18, 1956, Tillie married Carmie Fett. The couple had nine children and raised dairy cows on the family farm. Carmie passed away on April 10, 1986. On December 29, 1989, Tillie married Robert Minto. She worked as a nursing assistant for many years and was a past president and past district president of the VFW Auxiliary Post 1216. Tillie enjoyed being with her family on the family farm where she resided for over 60 years.

Funeral services will be held at 11 a.m. on Saturday, May 6, 2017, at St. Michael’s Lutheran Church in rural Waltham with Pastor Dwight DoBell officiating. Visitation will be held from 5 to 7 p.m. on Friday, May 5, at Worlein Funeral Home in Austin and one hour prior to the service Saturday at the church. Burial will be held in the church cemetery. Worlein Funeral Home of Austin is assisting the family with arrangements. Condolences may be expressed to the family online at www.worlein.com.