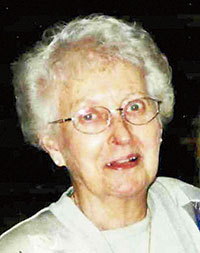 Margaret was born Sept. 10, 1917, in Austin to Martin and Ida (Lysne) Hanson. She grew up in Austin and attended Austin Public Schools.

On June 7, 1947, she was united in marriage to Pierce Tubbs at St. Augustine Catholic Church. Margaret and Pierce were parents to three children, Mary, Michael, and Ann. Margaret took great pride in being a homemaker and raising her family. Planning family gatherings and meals were a favorite pastime for her.

Margaret was a loving grandmother and was so proud of each of her grandchildren. She was a member of St. Augustine Catholic Church and the American Legion Auxiliary. Margaret enjoyed joining the Historic Hormel Home on many trips with her sister.

She is preceded in death by her husband, Pierce; her son, Michael; her parents; and her sister, Beverly Hanson.

A funeral Mass will be celebrated 11 a.m. on Monday, May 22, 2017, at St. Augustine Catholic Church with Father Jim Steffes officiating. There will be a 5 p.m., CCW rosary on Sunday at Mayer Funeral Home where friends may call from 5 to 7 p.m. and there will also be visitation one hour before the service at the church on Monday. Interment will be in Calvary Cemetery.