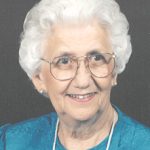 Luella Ida Hattie Stephan was born May 28, 1916, at home in Mt. Vernon Township, Winona County, Minnesota, the daughter of Henry and Ida (Brown) Stephan. She attended school in Winona and graduated from Lewiston, Minnesota, High School in 1934. She continued her education at Winona State. On July 8, 1937, Luella was united in marriage to William Duel in the Woodbury Parsonage in St. Paul. The couple had four children (Deanna, Becky, Barb and Bill). William died on Dec. 1, 1951, from Hodgkin’s disease when their youngest child was four. Luella became the bookkeeper at the Golden Dairy and was introduced to Herbert Benson, a widower with six children (Lorie, Hazel, Vern, Ronnie, Sherry and Allan). Luella and Herbert were married on Aug. 10, 1958, and had one child together (Gary). After their marriage, the couple moved to Blooming Prairie. Luella enjoyed sewing, gardening, traveling, including camping trips to the west coast and Canada. They also visited Europe and Norway. Luella made beautiful quilts and was able to make a baby quilt for every grandchild and great-grandchild. She was a member of First Lutheran Church and the Eastern Star. Herbert died on April 1, 2009.

Please make any donations in Luella’s name to the First Lutheran Church, 434 First St. SW, Blooming Prairie, MN 55917. Services prearranged and performed by the Worlein – Blooming Prairie Funeral Home. Condolences may be expressed to the family online at www.worlein.com.