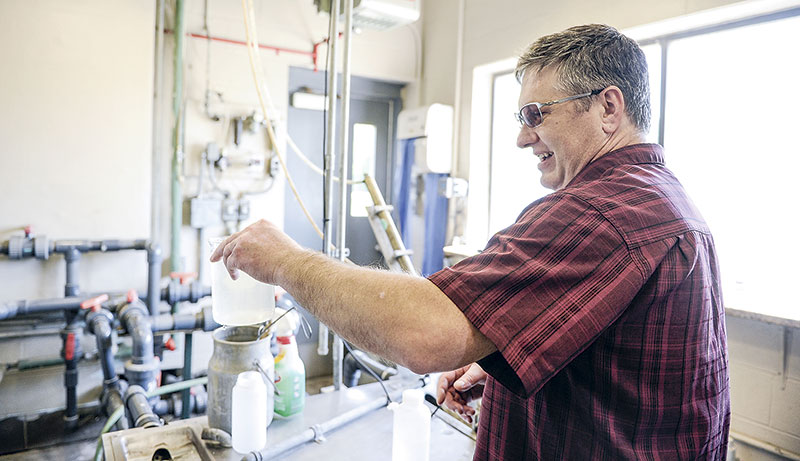 Chad Heard, wastewater treatment plant superintendent holds up filter water that is ready to be pumped out into the Cedar River, free of any kind of contaminates.

The city has known for a few years that recent changes in wastewater treatment regulations have rendered the Austin Wastewater Treatment Facility out of date and in need of upgrades. But now a recent Minnesota Management and Budget analysis estimates the cost to upgrade at a $77 million — that’s up from past estimates of about $20 million.

Austin was one of several cities, including Albert Lea and Rochester, to have their wastewater treatment plants analyzed. 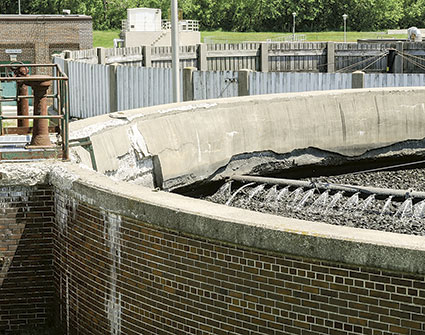 Cement from the inside of a trickle filter at the Austin Wastewater Treatment Plant is chipped away. It’s one of the items that remains in question depending on whether bonding money becomes available. Photos by Eric Johnson/photodesk@austindailyherald.com

On May 11, Austin city leaders joined the Coalition of Greater Minnesota Cities in lobbying the Minnesota Legislature. On the agenda was to urge the passage of a bonding bill to help pay for upgrades to the wastewater treatment facility. Without it, residents could see their sewer bills go up as high as 182 percent to pay for them.

“It’s important to recognize the financial impact it will have on our residents and businesses in the community,” said City Administrator Craig Clark. “If you have a new standard, it’s not like you necessarily just add on another treatment element to what you have here.”

According to Clark, the upgrades largely target the discharge from the plant.

“What comes out in the effluent on the back end has to meet certain environmental standards,” he said. “So what we’re looking at for the cost to the plant really depends on what we have to do to extract pollutants out of the wastewater stream.”

The recent regulations, created by the Minnesota Pollution Agency, were adopted despite the cost concerns of city leaders across the state.

“We implored them to do a financial analysis,” Clark said. “They didn’t agree with that and they went forward and adopted the rules.”

In late April, Clark sent a letter to Minnesota Pollution Control Agency Commissioner John Stine concerning the MMB’s findings. In his response, Stine stated that nearly 75 percent of the cost involved chloride treatment. He acknowledged “the treatment technology currently available to remove chloride from wastewater is cost-prohibitive for most municipalities,” and that he was “committed to implementing an approach that facilitates environmental progress and innovation while recognizing current economic restraints.” 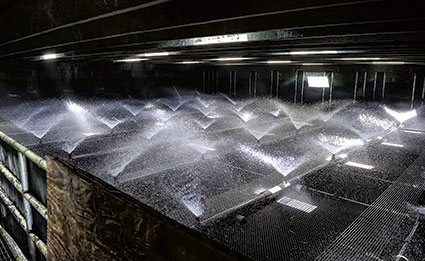 Sprinklers shower down through a process that removes ammonia from wastewater at the Austin Wastewater Treatement Plant Tuesday. Eric Johnson/photodesk@austindailyherald.com

But adding to the frustration is the fact that these rules were added without scientific research conducted to verify their effectiveness, according to city leaders.

“As a city, when it came to our wastewater treatment facility, we said we want the sound science to be able to justify the cost and we got push back from that,” Clark said. “Why would they adopt these rules without clear and independent peer review analysis that if we do these upgrades it will result in this benefit for the community?”

And Clark said the city has been striving to discharge clean water into waterways.

“We’ve taken affirmative stances to promote the environment and we know for a fact the effluent that’s coming out of the plant is cleaner than the receiving body of water,” he added.

But the greatest concern is how to pay for the upgrades.

“One of the challenges about being a low property tax wealth community is to be able to afford those kinds of expenses,” Clark said. “We’ll have to do our share too, but we’re really hoping the Legislature can come together. The bonding bill was a casualty last year. To not have another bonding bill this year would be intolerable. The standards are going to come down sooner or later, and having some money in the pipeline will be important.”

Massage parlor license to be revoked