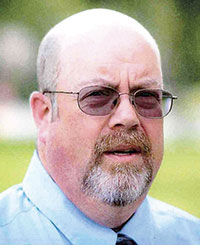 Kenneth John Titus, 54, of Austin, Minnesota, and Red Wing, Minnesota, passed away surrounded by family on May 22, 2017, after a long illness.

Ken was born on Feb. 18, 1963, to Thomas and Janet Titus in Austin. He graduated from Pacelli High School in 1981, and Albert Lea Vocational School in 1983. For over 30 years, Ken worked in the restaurant business, beginning with Hardee’s, Inc. where he worked in several locations. In 2004, he returned to Austin to help open the Culver’s franchise as manager, where he worked until 2013.

In July of 2013, Ken found his true vocation, working with troubled youth at the Red Wing Correctional facility as a corrections officer — a position he held until his death. Ken enjoyed this job immensely, working with the residents and staff each day. He touched many lives in a positive way while there and considered the staff he worked with his “other family.” Upon hearing of Ken’s illness in November 2016, his co-workers organized a benefit for him, raising funds to help with medical costs.

Ken was an avid Minnesota Vikings and Twins fan, as well any sport or activity involving his nieces and nephews. He had a fantastic memory for television and movie trivia, and amassed a large collection of favorite series and titles. His family enjoyed borrowing movies from him, as well as sitting and watching their favorites with him. Ken was especially fond of all things “Star Trek,” and owned every episode of every series.

Ken’s passion was his family, and he loved spending time with them whenever he could. His favorite memories were of holidays, weekend barbecues and vacations with his parents and siblings as adults. Ken was a kind and generous man who lived his life for others. If there was a way to help someone out in need, or just for the asking, Ken would selflessly give of his time and talents.

Ken is survived by his parents, Thomas and Janet Titus of Austin; brother, Jeffrey (Nancy) Titus of Geneva, Minnesota, and their children, Julia and Kelson Titus; his sister, Kristen (Kelli) Titus and their children, Jonas and Hannah Tomanek-Titus and Trevor Erickson; and many aunts and uncles, cousins and friends too numerous to count. Ken was a friend to all.

The family would especially like to thank the nurses and staff in the infusion center at Red Wing Hospital and the wonderful staff at Heartland Hospice who assisted in Ken’s care at the end of his life.

A funeral Mass will be celebrated 11 a.m. on Friday, May 26, 2017, at Queen of Angels Catholic Church in Austin with Father Dale Tupper officiating. Friends may call from 4 to 7 p.m. on Thursday at Mayer Funeral Home and also one hour before the service at the church on Friday. Private interment will be in Calvary Cemetery.