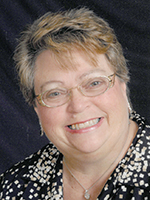 Kathy Mae Rolfson was born Aug. 7, 1952, in Albert Lea, Minnesota, the daughter of Dean and Marjorie (Petersen) Rolfson. She attended school in Austin and graduated from Austin High School in 1970. Kathy continued her education at Austin Vo-Tech College in the cosmetology program. She worked as a beautician for 20 years at Southside Beauty Shop and Hair Plus and later as a cake decorator at Hy-Vee for several years. After her retirement, Kathy worked at Kid’s Corner. On Nov. 19, 1971, she was united in marriage to Lawrance Pieper at St. Peter’s Catholic Church in Rose Creek, Minnesota. Kathy enjoyed camping, tending to her flowers, knitting, crafting and making quilts.  Her greatest joy was spending time with her grandchildren.

Survivors include her husband, Lawrance Pieper of Austin; a son, Jeremy (Becky) Pieper of Mankato, Minnesota; a daughter, Angela (Andy) Bissen of Stacyville, Iowa; three grandchildren, Nicholas, Emily and Annabelle; her mother, Marjorie Rolfson of Austin; two brothers; four; sisters and many other relatives and friends.  She was preceded in death by her father, Dean Rolfson.

Memorial services will be held at 11 a.m. on Saturday, May 6, 2017, at the Worlein Funeral Home Chapel. Interment will follow the service at Calvary Cemetery.  Visitation will be held for one hour prior to the service at the funeral home. Condolences may be expressed to the family online at www.worlein.com.