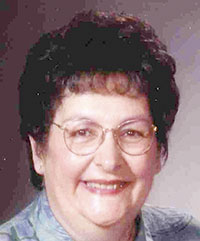 Jeanne was born on July 23, 1942, in Austin and graduated from Pacelli High School in 1960. On May 11, 1963, Jeanne married Daniel Hagan at St. Augustine Catholic Church, where she was a lifelong member. They were married for almost 41 years when her husband Dan passed away. Jeanne lived with her son Dwayne and his wife Mary and their four children for nine years after her husband’s death. She enjoyed having family close by and was involved in many of their activities. Watching the deer and birds out her front window gave her great joy. After several health issues Jeanne went to live at the Adams Health Care facility and then several months later moved to Sacred Heart Nursing Home in Austin, where she passed away.

In her younger years she enjoyed attending dances at the Terp Ballroom with her sister Janet and cousin Joan. She liked spending time with her parents and siblings in Las Vegas, making many trips to visit them over the years. She was very proud of her 10 grandchildren and delighted in hearing about their various activities. Jeanne appreciated listening to music on the radio or school concerts. Many people enjoyed her holiday treat trays and graham cracker pie. Her favorite places to eat were Perkins and Kenny’s Oak Grill, not only for the great food, but also for the friendly staff.

She is preceded in death by her parents; two sisters, Bonnie Peters and Doreen Grant; brother, William Grant Jr.; and grandson, Michael Dolecheck.

A funeral Mass will be celebrated 11 a.m. on Friday, June 2, 2017, at St. Augustine Catholic Church. There will be a viewing from 5 to 8 p.m. on Thursday, June 1, at Mayer Funeral Home and also one hour before the service at the church on Friday. Interment will be in Calvary Cemetery.

In lieu off flowers memorials are preferred.