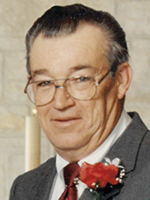 He was born Dec. 31, 1939, in Olmsted County, Minnesota, the son of James F. and Dorothy (Peterson) Gwilt. On Jan. 10, 1959, James married Evelyn Callahan in Rochester, Minnesota. The couple made their home in St. Charles, Minnesota, before moving to Austin, and then to Blooming Prairie in 1971. James worked for many years as a master mechanic for Ulland Brothers Construction. He enjoyed the outdoors, especially camping and fishing. One of his favorite pastimes was working in his shop with his sons. His family will miss him dearly.

At James’ request, no formal services will be held. Burial will be at a later date at Union Cemetery, Pleasant Grove, Minnesota. Cards may be sent to Evelyn Gwilt at 6811 SE 158th Street, Blooming Prairie, MN 55917.

Worlein Blooming Prairie Funeral Home is assisting the family. Condolences may be expressed to the family online at www.worlein.com.